Look at this face: 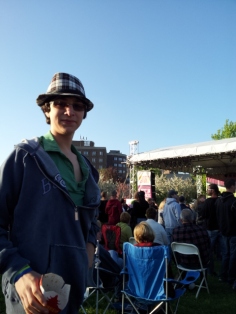 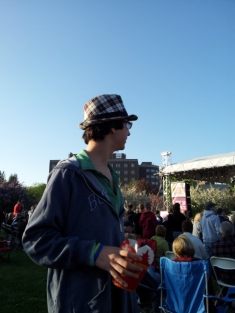 This is the face of a very excited boy who in these two photos just made the realization that he, along with the rest of the musicians of the Twelve Corners Middle School Jazz Band, would be playing on this stage.

“It’s so cool. It’s way bigger than the stage at school. Can I play my guitar REALLY loud?”

This is a video clip of the TCMS Jazz band; a preview of what they’ll be playing tomorrow:

Maybe his music teacher will not allow him to turn up the volume as loud as the Spin Doctors did when they took the stage on Saturday night at Rochester’s annual lilac festival. But yes, they will sound way louder then when they play at school.

And yes, he can play louder than what I allow in our basement. (His amp is only permitted to go up to “2”)

Hey – I know it’s a cold night. But the weather promises to heat up on Wednesday. So, if you are in town, come have lunch in the park at the Lilac Festival and listen to some great young talent.

The lilacs aren’t too bad either.