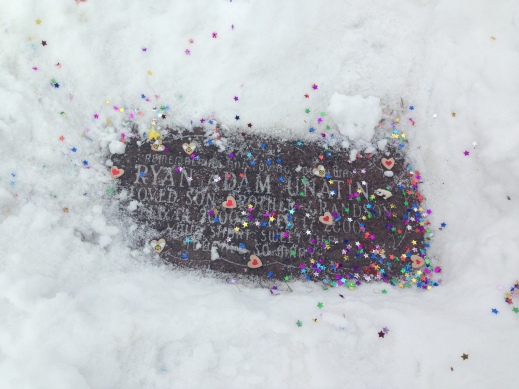 Joe Winter
makes sure Ryan Unatin’s
headstone is clear each Valentine’s Day.
pation caring for cemetery grounds “just as
interesting as any other landscaping position.”

Winter, especially the record-breaking one Detroit just  endured, can be isolating and depressing. It is harder still for those observing an anniversary of a loved one’s death to visit their grave in a snow-covered cemetery.

Fittingly so, a man named Joe Winter, caretaker at Beth El Memorial Park in Livonia, eases the sorrow of the mourner bymaking sure that certain graves and the paths leading to them are cleared of snow.

For almost three decades, Winter, 56, has cared for the cemetery and lived in a house just outside the ground Joe Winter where he and his wife, Claudia, raised their four children.

Trained as a horticulturist, Winter always enjoyed working outside and saw his occupation as a peaceful one. He started out as a groundskeeper at Gethsemane Cemetery in Detroit and then became superintendent of the Beth El Memorial Park in 1985.

Growing up, his children never thought the location of their house was odd.

“They always just considered it as one quiet backyard. I’d let them ride their bikes
on the paths after the gates had closed for the day,” he said.

As superintendent of the cemetery, Winter’s responsibilities include keeping in daily contact with local rabbis and funeral directors to schedule burials. He also is the cemetery’s main record keeper.

The cemetery is open every day from morning until 5 p.m., except Saturday. If a mourner needs to linger a bit after 5 p.m., he says he does not mind keeping the cemetery gates open a bit longer.

As the weather warms, Winter and his staff keep the lawns mowed and the bushes trimmed. He provides a supply of American
flags come Memorial Day weekend and makes sure they stay up on each grave until Flag Day on June 14.

“Of all the mourners, the toughest ones to see when they come here are the parents of
young children,” Winter said. He recalled a woman who lost a young son and visited the
grave nearly every day for eight years.

“Joe Winter deals with human beings during the most vulnerable moments of their
lives,” said Rabbi Daniel Syme of Temple Beth El of Bloomfield Hills. Syme, who has
worked with Winter for 17 years, said overseeing a cemetery is a job that not many can
emotionally withstand.

“He supports all who come to the cemetery at a time when they are looking for
kindness, when their own inner coping resources are not there,” Syme said.

One such person Winter has comforted in his work is Julie Unatin of Huntington
Woods.

On Valentine’s Day, Feb. 14, 2000, Unatin gave birth to a son, Ryan. Five days later,
baby Ryan died. What should have been the happiest of days for her, husband, Brian,
and their two daughters turned out to be the worst.

In March of that same year, Unatin, a teacher consultant for the blind for the
Oakland Intermediate School District, learned that another co-worker, Kate
Salathiel, also had lost a child. The deaths of their children have created a special bond between the two women.

Each winter, they support each other as they visit their children’s gravesites in different
cemeteries — not on the anniversary of their death, but on the day they were born.

Expecting her arrival at Beth El Memorial Park, Winter clears a path to Ryan’s grave
in advance of her visit. Winter also makes sure that any snow is brushed away from the
gravestone.

“Every year I know what I will find,” Unatin said. “A beautiful stone that has been
dusted and cleared; sprinkled with 14 years’ worth of small tokens. Without even being
asked, Joe makes my unbearable Valentine’s Day a bit more bearable.”