Just another rocket fire-free day in the Motor City 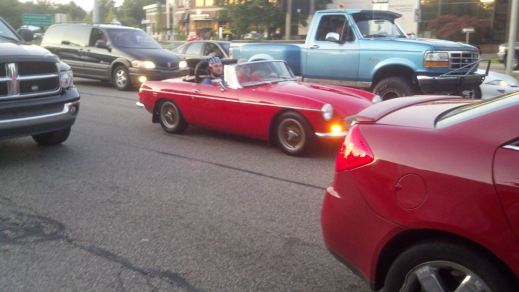 Summertime is usually a carefree time.

This summer, it has been hard for me to focus on anything that is not Israel. And usually I love thinking about Israel – all the great things it gives the world , memories of my four visits there, and now living vicariously through my daughter, who is spending her summer in Israel.

That’s where the carefree element of my summer has all but disappeared.

It started with the kidnapping and murder of the Israeli teen boys. It was followed up with the equally horrible murder of that baby-faced Arab boy.  Then the increase of rocket fire. And now, our soldier’s putting their lives in jeopardy to protect the lives of all living in Israel.

The news has been all-consuming. Other news is barely registering with me. Was there some ruling on Hobby Lobby that I should be all fired up about, or sending unaccompanied children back over the border to Central America? What was that again? But, oh, another rocket has been fired into Israel. Another Palestinian child has been used as a human shield by Hamas. Oh, am I supposed to be packing my youngest up for camp?

Over Facebook, I see my Israeli friends posting about running to a bomb shelter, or a miklat,  a safe room,or when there are neither of these things, a bathroom or stairwell shelter.

Some darkly joke about what are the top 10 essential things you need in a bomb shelter. Topping that list includes flashlights, water, ice cream, wine, and chocolate. LOTS of wine and chocolate.

This week, I had to ask the surreal question to my daughter, who wished to visit her friend for Shabbat in Ra’anana.

“Can you please find out if your friend’s family has a bomb shelter?”

Can you imagine asking your American friend such a question before visiting?

Do you have cats, ’cause my kid has allergies.

What can I bring you for dinner? Wine? A salad?

Oh, and does your house have a bomb shelter?

In more peaceful days in Israel, I remember spending a summer working on a kibbutz up near the Golan Heights. I didn’t think twice about going into a bomb shelter, but they were pretty much used as “disco” shelters back in the 80’s. The shelter was a cool place to hang out at night after working. I never associated it as a place to take cover from an attack.

In more peaceful days in Israel, I gave my daughter about 50 shekels for the evening as she set to hang out at night in Tel Aviv with her friend, the one from Ra’anana. They roamed freely the streets of Tel Aviv, got pizza and gelato, and hung on the beach until 11 at night.

This Shabbat, my daughter, my intrepid and strong daughter had her first taste of what it is like to sit in a bomb shelter.  She heard the boom of Israel’s Iron Dome shoot down a rocket aimed for where she is, a suburban town near Tel Aviv. In her nonchalant manner, she said it was like going to hang out in our basement.

Last weekend, I tried to snag some of my own carefree moments. My husband took me on a bike ride along West Bloomfield’s trail system.  I felt carefree and peaceful. But every now again, a dark thought crept into my mind. If a siren went off along the path, and we had 15 seconds to take cover, where would we go?

Last weekend, friends who, most likely sensing that I really needed a night out, invited us out to Detroit’s Concert of Colors. Among the many free acts who played at Detroit’s Orchestra Hall was the Sierra Leone Refugee All Stars  group that came out of the horrors of war in their native country and helped heal with music.

Indeed, the infectious music was healing and joyful.  Everyone, in every shape, size, color, religion was dancing in joy to the music. I also let myself feel some joy and danced with my husband. The leader of the band was right. He was no doctor, but he said dancing a little bit every day gets rid of all the toxins in your body and makes you feel good. After every song, the leader of the band just wanted to know one thing from their audience: Are You Happy?

But there was one guy at the show with a smug look on his face. He wore a beat up T-shirt that read “Free Palestine” in English and I guess Arabic. He didn’t look happy. But I refused to let him make me not feel happy that very moment. Even though, I felt like telling him, that cause he holds dear, well, some of the people who are so dedicated to that cause would have no druther about strapping a bomb to themselves underneath their clothing, walking into that concert hall where we were all dancing in joyous unison, and blowing us all to pieces.