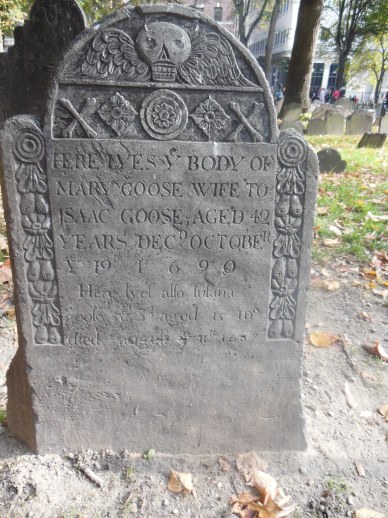 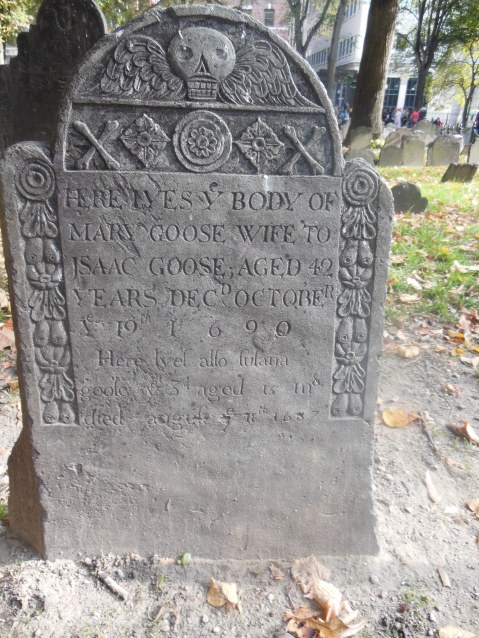 is this grave the final resting place of the woman who was known as Mother Goose?

In this week’s photo challenge, bloggers were asked to present a photo about “beyond.”

To many this conjured up images of city and bucolic landscapes.

For me, I thought of the beyond as the Great Beyond.

This fall, a few days before Halloween, I visited Boston and walked the Freedom Trail. Along the trail is the Granary Burial Ground, the ancient cemetery where many of this country’s earliest patriots are buried.

Though she rests in the great beyond, Mother Goose’s poems have been read to children through the centuries, to the present and beyond.

from Rochester to Staten Island, all the donations made it down safely. My family with David Sorkin, exec director of the Bernikow JCC, Staten Island

A few weeks back, I wrote the first part of helping out back in Staten Island

I called it Part I which means, of course, there will be at least a sequel.

Well, it’s been a rough few weeks healthwise in our household so my apologies for the hold up on Part II.

It turns out that my synagogue’s education director in Rochester is childhood friends with David Sorkin,  the executive director of the JCC in Staten Island. Our synagogue was collecting donations for Sandy victims in Staten Island. Their only problem: how were they going to deliver the goods?

So, in addition to helping out the fine volunteers at Guyon Rescue, with the help of my husband’s colleagues at General Motors, we borrowed the biggest Suburban you’d ever lay your eyes on and filled it with the gently used  and new toys, books, art supplies and toiletries to be distributed through the Bernikow Jewish Community Center of Staten Island.

When I returned home to Rochester, Temple Beth El received the following letter from the JCC  in thanks for our donation:

Thank you very much for the toys, books, games and gifts that you collected for the children of our community who have suffered great losses from Hurricane Sandy.   Also, special thanks to Stacy Gittleman and family for delivering supplies to the JCC.

As fate would have it, we received a call on Monday morning from a day care center that experienced damage from the storm and they were seeking replacement supplies. In addition, we sent some of the supplies to one of the shelters that are housing families.  They were setting up a play room for the children, and your donations helped to create a warm and welcoming space in an otherwise bare and sterile environment.  Some of these same children received the cards that were made by the children at your school.

Most of all, we must tell you that your acts of kindness will be remembered by all involved long after these families return to their homes and their lives get back to normal. …..

Thank you again to all my Rochester friends, neighbors and congregants who filled bins and my garage with donations that we brought down to Staten Island. I just wanted to share this letter with you to know how much it was appreciated.

Have the Flu? Stay Home, the World Can Wait!

These were the words of my son petitioning me this morning from his bed. These words came from his mouth, which was attached to a head, a head as hot as coal. A head which could not be lifted from his pillow.

“Just give me some Advil, and I can go!”

His concern: An overdue tech project that needed to be completed in school. A CO2 car he has designed and engineered that still needed to still be sawed, glued, and painted.

He is also worried, of course, about falling behind in math. And Science. And how will he ever catch up and HOW he will get ready for midterms.

He puts this pressure on himself to not to stay home and recover from the flu but to GET TO SCHOOL no matter how he feels. No matter the consequences to his own health or those around him.

My son is not yet in college or even in high school.

He’s only in the 8th Grade.

If you can’t even stay home and rest up from the flu in the 8th grade with a clear conscience, then what does that say about our culture? Is there any wonder we are in the midst of an influenza epidemic?

Now, we all think we have THE most important jobs in the world.

Unless we are at death’s door, don’t even think about skipping work or school.

Even I have come under this delusion of mind over virus.

Last week, in I went to teach afternoon instruction because I felt I HAD to be at work to show my commitment. I was not hacking and coughing. I HAD a prescription for an antibiotic in hand (seems like, if you have flu symptoms and don’t rest them, the darned germs morph into something else, wouldn’t ya know?).

I was just a little stuffy.

And my eyes were sunken in because I had barely slept for two …. no three nights because my sinuses were killing me but

Life goes on and we muddle through.

At the copy machine my boss asked.

“What are you doing here?”

Fortunately, I have a boss who does have the voice of reason.

“You will do no such thing. You look like hell. I appreciate you want to work but you shouldn’t be here. Now go home and get some rest.”

So rest I did and I am better now, a week later. Even so, my energy is not fully back.

So, when it was my son’s turn to fall ill, I did not let him succumb to our hyper-achievement culture.

He’s home. He has a fever that spikes back as soon as the latest ibuprofen dose wears off. But he is resting and doing his work and playing his guitar when he feels up to it.

Will he go back to school tomorrow? Don’t know. We’ll just have to see.

Fess up: have you ever went to work/school when you know you were too sick? 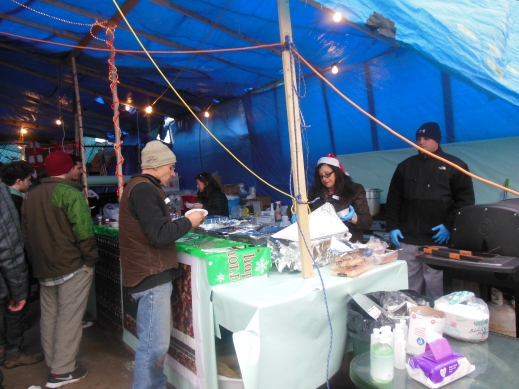 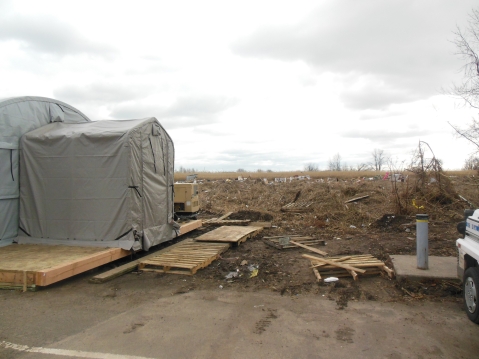 with wreckage in the background, Sandy relief workers from Guyon Rescue in Staten Island wrapped Christmas presents in this tent. My parents house, my childhood house, is just on the other side of this field.

Over my Christmas vacation, I spent hours on a cold floor in Staten Island rolling black plastic contractor bags into bundles of ten.

On my knees, I wrestled  with the bags as a camper would a slippery sleeping bag and secured them together with a rubber band. Though this job seemed minor and menial in the scope of helping in the wake of Hurricane Sandy, to someone else who needed those bags to clean up whatever was left of their house, it might mean a lot.

As I worked, a steady stream of volunteers flitted in an out, stocking shelves as well as dropping off supplies. One woman who seemed somewhat in charge said she had volunteered at the Post every single day since the storm hit. Other shelters were closing on the Island and this leading volunteer feared that already, the rest of the world was forgetting what happened here.

She’s the one who needed those contractor bags bundled.

And she needed me to divide up other supplies like steel wool pads with those tiny pods of dish soap.

And she had socks that needed sorting and baby food inspected for expiration dates. My three kids got on that job.

At Guyon Rescue, there is no need for volunteers to make a reservation.  There are no shifts. No training videos or marketing messages like other food pantries where my family has volunteered. You just show up and say you want to help. And they put you right to work.

Guyon Rescue is not a shelter, exactly. No one sleeps there. But to the many neighbors in this devastated area of Staten Island, Guyon Rescue has become a vital resource for short-term help since Hurricane Sandy.

Guyon Rescue is an all-volunteer grassroots network of workers and donors that have set up camp in a VFW Lodge around the corner from my childhood home, across the street from so many homes damaged and destroyed. Two months after the storm, you would not believe how people are still living unless you walk the streets here for yourself.

The lodge where I went to Brownie meetings has become Guyon Rescue, a grassroots organization that collects and distributes necessities for Sandy victims on Staten Island.

My husband and I also worked outside. With numbed fingers, we scrubbed out a donated refrigerator until the shelves were clean enough to eat from.  We dried off equipment and supplies in a make-shift outdoor kitchen sheltered only by a tattered, tarp roof. Many of those preparing meals lived in the neighborhood and could tell stories of the storm surge. Of how many feet of water was in their basement. Or up to the ground floor. In the aisles of the food pantry, one woman collecting goods after she showed her FEMA card at the door told me how she swam out of her house. 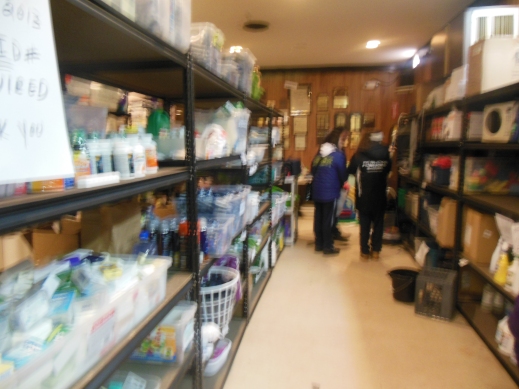 It was Christmas Day, and soon, many who still had no power – or were camped out in cars near the remains of their property – would be coming to the post for a hot lunch.

At night, just a quarter mile from Guyon Rescue,  my husband and I slept in my parent’s basement on an air mattress.  It’s been two months since the storm and the basement looks back to normal. Except they lost most of their furniture when it became flooded with nearly four feet of water.

Now,  don’t you go taking out any tiny violins for me or my family. We are the lucky ones.

Over my Christmas vacation to New York city, I also saw the Scream,

and still-life paintings from Cezanne.

We dined on the finest hot dogs and kinishes a New York City street vendor could offer.

And of course, we visited the tree in Rockefeller Center.

But if you ask me what was the best – the BEST part of my Christmas vacation back to New York City, it was volunteering with the good people at Guyon Rescue.

Want to make a difference in Staten Island with Guyon Rescue? Keep updated by following them on Facebook here. Because the recovery is not over.

In Staten Island, it’s only getting started.

now, if you could hear me say this to you from behind my stuffed nose it would sound more like “Habby Dew Year.”

Before I can start on this year’s goals: decluttering and cleaning my home to get it ready to sell, going to the gym at least three times per week, I resolve to get HEALTHY!

That’s why my answer to this photo challenge is this: 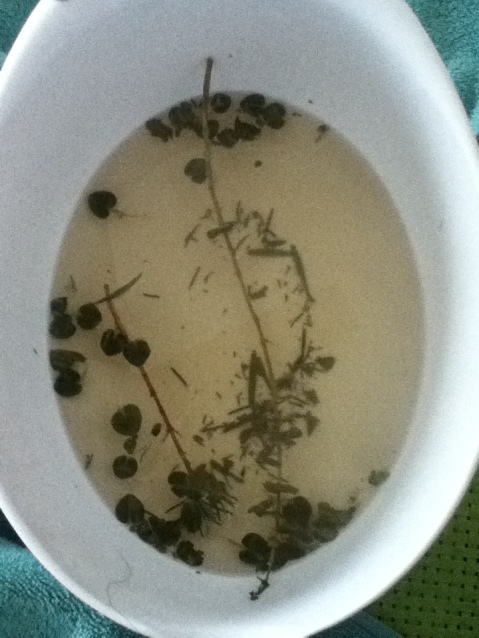 This is a bowl of eucalyptus leaves I pulled off a bouquet recently purchased at Trader Joes. I mixed it with some dried lavender from this year’s garden, plus some Kosher salt. I poured boiling water over it and voila! A home spa remedy that will hopefully relieve my misery.

Before I do anything else this year, I resolve to get healthy again!