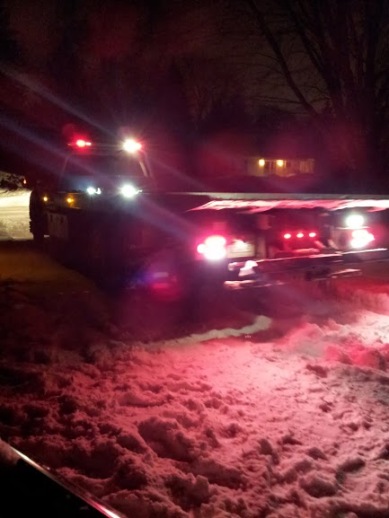 First tale, as retold by my mother-in-law on an incident that happened to the grown children and grandchildren of their longtime friends:

In December, two families from suburban Long Island, each with two or three children with the oldest of age 12, followed each other caravan-style north to a ski vacation rental in Vermont.  There was a winter storm warning and, thinking they could push through, the families drove into the night. Main highways became impassible so the families decided to take alternative routes on local roads.

As the roads began to ice over, one family’s car swerved to avoid another car, slid and became stuck in an embankment.

Witnessing what happened to the first car, the second car in the traveling party pulled over to see if they could be of assistance. In trying to help, the second car also then became dangerously stuck in a snow embankment. On a strange rural street. In the dark. In the cold. In the storm.

All the while, the two stranded families were unaware that a family living on the property was watching them. They approached the families who were stranded on their property – a group of about 12 complete strangers – four adults and their children – invited them in for the night, and gave them dinner and a place to sleep, and shelter until their vehicles could be dug out the next day.

To that angelic New England family who opened their doors to strangers on a stormy winter night, they will most certainly receive good Karma in this life or the next.

Next story. My story.

Funny how appearances change of buildings and streets in the snow. Especially in suburban Detroit neighborhoods you think you’ve gotten to know pretty well in the six months I’ve lived here.

I was on my way over to a good friend’s house to pick up my son from an extended play date. I was not sure of the exact address, and I didn’t feel like punching it into my GPS system. After all, I had been there several times in the summer and fall, to press cider and just enjoy the company of our new friends. I thought I knew my way and knew the house.

But like I said, something very disorienting happens in the low light and snowy landscape of winter. So disorienting that I pulled up the curvy, snow-covered driveway of the wrong house. Just one identical looking wrong house away were my friends, their daughter and son, and my son, happily playing.

Just one house away, I was catching some bad Karma.

I realized my mistake, and started to attempt to back down the driveway. Only, because of the curve and the snow, I missed it, and backed up into a soft, snowy part of the front lawn.

Funny how one can still use the word “lawn” in a polar vortex winter. Because no one has seen their lawn here since November.

Instead, my wheels spun and whirred deeper into the lawn.

A man living next door saw my plight. He bundled up (it was 9 degrees) came out with two shovels, and we both set to work trying to dig me out. He even offered to get some chains and hooks from his car to drag my car out. I thanked him, but turned down his offer, afraid of the damage either of our vehicles might incur.

Finally, after 20 minutes of this, she came out.

She was not helpful.

“What the hell do you think you are doing to my lawn???”

“I’m sorry, ma’am… I was going to pick up my son at your neighbor’s house and I mixed up the houses and – ”
“WHAT ARE  YOU DOING ON MY LAWN? WHO IS GOING TO PAY FOR THIS??” She went on and on about her poor lawn and the damage I was doing to it. She did not ask if I was okay, if I had called for help, if I was cold, needed a cup of hot coffee.

In suburban Detroit,  some people care about their lawns – even in the winter – more than they care about people.

Angry and embarrassed, I left my car and ran to my friends’ house. I’m not surprised that the two neighbors don’t even know one another. Usually, nice people don’t tend to socialize with mean people.

My car was eventually towed out by AAA, and my friend, her husband, and my husband came to my aid.

But not the mean blond lady, who actually took a photograph of my license plate as I was on my hands and knees trying to dig away the snow to free my car.

Mean blond lady, your lawn will be just fine. I’ll even come over with a bag of dirt and seed in the spring to fix your precious lawn. Because I said I was sorry 10 times. Because I’m that fucking nice.

Mean blond lady, you will also get your Karmic justice. It’s coming.

Has old  man winter been a bitch to you? If so, rant away and please SHARE!

Looking far and wide, and into your jar of Peanut Butter – for college scholarships

In the Sallie Mae 2013 study on how America pays for college which surveyed 1,602 families, the average family covers 32 percent of their college costs with grants and scholarships.  The majority of families who received scholarships report having received them from the college (61%), although families also report receiving scholarships from community and nonprofit groups (30%), and receiving state-based scholarships (18%). In 2012, the average scholarship awarded was $6,355, the highest level over the past five years. The study also revealed that of the parents surveyed, 63% said that having a discussion about earning scholarship money was one of the most important conversations they could have with their child when preparing for college.

Read the entire article, my latest in a series of articles about financing college at road2college.com.

Next up: Private vs. Public college. How to choose? If you have a story about why you chose one over the other: (financial costs, class size, prestige) let me know.

We Love a Challange!

as I settle into my new suburban home, I think about the changes I will someday like to make, and the pieces of furniture and decor accents I will someday like to buy. when I do, I hope to use reclaimed materials from the 7,000 homes that plan to be deconstructed from Detroit. Think of all that old-growth hardwood and beautiful detailing that once graced these beautiful homes. The Sunday Detroit Free Press’ business section contained a story of how 2014 promises to step up blight removal in Detroit. Let’s hope that is coupled with the sustainable practice of deconstruction. Spread the word and reblog this post!

We are working hard to make sure that deconstruction is a part of the efforts to remove blight. We have made a presentation to the Blight Task Force and have submitted a proposal to be on the deconstruction contractors list with the Detroit Land Bank. You can help! Spread the word and speak passionately about Reclaim Detroit. Come visit our warehouse and purchase one of our products.

Deconstructing 7,000 homes (that’s only 10% of estimates) would generate $458,000,000 in economic activity – 4x more powerful than if those homes were thrown in the landfill.