My name is transplantednorth and I blog for the trees 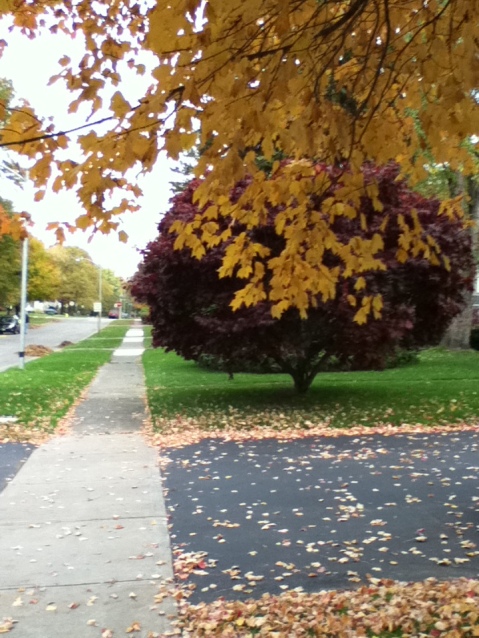 The other morning I phoned my sister-in-law in northern New Jersey.  I needed to know her Hebrew name for  an honor she was receiving for the morning service at my son’s Bar Mitzvah, now only days away.

I called her cell phone a few days ago after 8:45 in the morning. With four kids in school, she had to be up. She is always on the go.  Instead, a very groggy voice answered.

Oh, of course, that’s why I was calling. But why did she sound so tired?

“Why arent’ you up? Don’t you have kids to get to school?” Fool that I was, with the glorious November day outside, and the fact that Western New York again survived the latest storm to hit the east coast unscathed, I was not thinking about how  bad things were back in the NYC/NJ Metro area. The now-dubbed Halloween snowstorm had turned the streets of parts of New Jersey into what looked like a war zone. With downed trees and downed power lines, it was even too dangerous to go trick-or-treating.

“I’m sleeping at a friend’s house. We have no power and no heat.”

She sounded so sad. She still had no power after two days. The kids had no school for two days straight. But the one thing that seemed to make her the saddest was:

“You should see my block. We lost so many big, beautiful trees.”

It takes decades for a tree to really mature. I know because I live on a street with huge Sugar Maples that look like this:

In the winter, when the snow is wet and heavy enough to put a coat of sugar on every last branch and twig, my street looks like this:

The snow-laden trees above were planted because  they were fast-growing trees for Rochester’s first suburban development.  They are now almost 90 years old.

Trees planted closely to houses are dangerous when they age and begin to rot from the inside out. Last weekend, our neighbors took down one of these trees. The bottom trunk was this big: 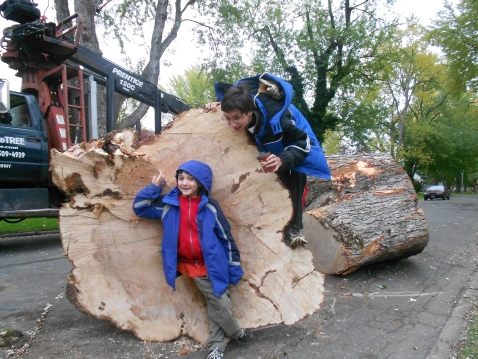 This tree saw 90 years of changes of seasons, survived ice storms and blizzards. It saw generations of school children off on their first day of school. It was a home to birds and squirrels who played in its branches. But it lived out its days and succumbed to “crotch rot” of all things. Now, where its branches once stretched out, there is a whole punched into the sky where it once stood.

When snows fall heavy before the leaves drop, trees come down before they get a chance to live out their days. Back in New York City, Central Park lost 1,000 trees; trees that were just beginning to peak in their fall splendor of color.  Trees that were planted generations ago so that we may enjoy them.

The other week, my son got a gift from a relative in honor of his Bar Mitzvah. In the true Jewish tradition, a ring of trees had been planted in his name in Israel. It’s a good thing we are headed there this winter to water them!

Now after this devistating storm that cancelled trick-or-treating and felled countless trees close to home, it seems like New York City needs new trees just as much as the land of milk and honey. The Central Park Conservancy is now asking for donations to restore its tree population.

Do you have a favorite tree? How would you feel if it were destroyed or it had to come down?  Or, did you lose a tree to the Halloween storm? If so, I am sorry for your loss. Why don’t you write about it here?