Carrying In, Not Carrying Out – The Trashing of our Parks 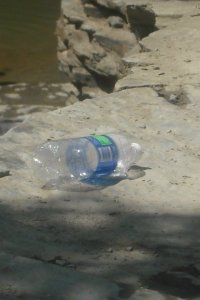 can people not pick up after themselves? Even on a nature trail?

I was glad to see that there exists a blog category such as a rant. This blog should have been a rave, but I will woefully have to rant instead.

I spent a beautiful day last weekend with my husband and our youngest child at Stony Brook State Park in New York, just north of Corning. If you have been to this park, you know what a treasure it is.  If you have ever been to Watkins Glen State Park, near Ithaca, you have had a similar experience. But, at Watkins Glen, there is absolutely no going in the water, as inviting as the water looks. It’s too rough. The current there would pound anyone to a pulp.

But Stony Brook State Park features a gently sloped, rambling stream that invites you in to make your way through its swirls, try out its natural water slides,  stand under its gently cascading falls. All around you this brook over the centuries has carved out a ravine which is now lush with forest and ferns. And, there is also a parallel trail to the brook for those who want to stay dry.

One would think that any visitor would hold a place like this, or any park, state or national, in high regard, to keep it clean and pristine.

The first disgusting thing I found in Stony Brook was an empty pack of cigarettes floating in the water. Gross as it sounds, I snatched it up and put it in the pocket of my cargo shorts. Those pockets were meant to hold stuff, and if I could put them to use by carrying out some litter, all the better.

Then, I passed a few water bottles, sitting empty on a slab of stone, abandoned by their consumers. I shoved them in my son’s backpack. I got a complaint from my husband when I added to my litter collection a crushed empty can of Coors Lite.

After picking up this my next piece of trash out of the brook, that public service announcement came to mind, the one from the 1970’s when I was a kid, that Native American crying that one tear. He has to be long dead and gone, but he is most likely still crying in his grave by the looks of things.

This item of litter did not please my husband.

“Don’t do that, then our backpack will smell like beer! They have people to pick up….”

“Really????” I snapped, annoyed that he was annoyed with me picking up litter rather than annoyed that someone broke the hiker’s rule of littering!

The truth is, there are no people to pick up after us along the trail. You bring a water bottle on the trail, YOU bring it out of the park with you when you are finished! You need a cold one as you watch the waters bubble over the smooth stones, YOU don’t smash it and leave it there for someone to pick it up.

The thing that bugged me also was the NUMBER of bottles and cans I saw in this beautiful place and the NUMBER of people I saw just walking past it.

But the most disgusting bit of abandoned refuse, I must say, was the dirty diaper. Crammed into the crevice of a rock, a rock I almost used as a place to hold on to on a slippery stretch of brook.

Well, I had to draw the line there.

People, pick up after yourselves when you go hiking! Do you need a reminder of the hiker credo: Take nothing but photographs, leave nothing but footprints!

And, if you are hiking, and you see something fouling up the surrounding natural beauty, PICK IT UP!! Imagine how much cleaner our nation’s parks would be if we picked up one or two pieces of trash along the way.