“Come in,” I said “I’ll Give You Shelter From the Storm.”… if you clean my basement 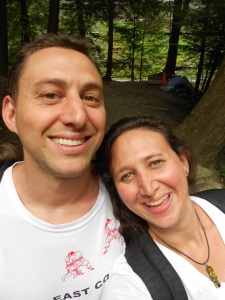 I love having summer guests. This summer, I convinced my brother and sister-in-law  to come up for a long overdue visit the last weekend of August. Even though my husband and oldest son would be away on a father-son baseball road trip to Cooperstown and a double-header at Citifield, I welcomed their visit. Niagara Falls, a water walk in Stony Brook State Park and the Erie Canal were in my plans. Hurricane Irene, a flu-like virus, and cleaning my basement were not in my plans. But all of the above happened in one packed weekend.

I am apparently a negligent housekeeper.  It’s not that I didn’t clean before my family arrived. I scrubbed bathrooms and even dusted and vacuumed stairways and rugs. But, my undiagnosed ADD shows through in my cleaning. I miss a lot of spots. And I’d rather be gardening, reading, or writing than cleaning.

To my defense, my two children had just returned, laundry and all, from summer camp. We still had mountains of dirty socks and sleeping bags to conquer when the Cooper clan showed at my door on Thursday. And I still prepared a birthday party dinner for my nephew, planned a picnic for the next day at Stonybrook, and played tour guide again on Saturday at Niagara Falls.

Then, somewhere between the Maid of the Mist and the Journey behind the Falls on Saturday, I got sick. Once home, I surrendered myself to my bed and the mercy of the Cooper Cleaners.

Now, I know my brother and sister-in-law weren’t criticizing me at the sorry state of my basement. Glenn was truly concerned about the high humidity rate in my basement and my out-of-comission dehumidifier.  He was concerned because he noticed mold growing on some of my basement walls, and, well, my office chair, and the soggy condition of some of the contents of my downstairs pantry. And there is a cause for concern, as my youngest has asthma.

“When was the last time this thing worked?” he asked, as I lay in bed, about my basement dehumidifier.

I confessed: I cleaned it out earlier this summer. I vacuumed out the lint vent and the metal coils in back. But I hadn’t noticed if the dehumidifier was working in many months.

“How old did you say this thing was?”

So, I pulled myself out of bed and off we went to the Home Depot to get me a new one. While we were there, my brother was also on the hunt for a backup sump pump. Hurricane Irene was battering the east coast. We were watching coverage of the storm’s progress all day, and he was concerned his New Jersey basement would become flooded. We got a dehumidifier, but no luck on what he needed. He checked Lowe’s too, and they were out of the sump pump as well. Apparently, people had traveled as far as Albany and Connecticut to get ones for their flooded homes.

Sunday rolled around. My family decided to wait out the storm at my place and not traverse the roads until Monday. That was fortunate for me,  because I became even more sick.

I spent the whole day in bed. When I rose, I went downstairs to find my dining room table  was filled with clean, folded laundry. I went further downstairs to my basement, to find the remains of the dirty laundry sorted in baskets. And my  basement floor had been swept clean.

AND: My brother installed my new dehumidifier and got the humidity level down to 65 percent.

I felt embarrassed and guilty that this was supposed to be my sibling’s getaway and they were instead holding down my household while worrying about theirs. I was eternally grateful.

And what was the payback? The Coopers returned to New Jersey, after being rerouted several times from the New York State Thruway and Route 17 to find they had no power.

Not because of Irene. Because a crazy old man who lived across the street, jealous that their side of the street had power and his had none, blew out a power transformer on the block with a shot-gun.

He got arrested, according to the news report. You can’t make this stuff up. It’s true.

Thanks for taking care of me, little brother and sister. A thank you gift is coming in the mail.

I hate you! Now play with me now! Sibling love

One year on the last day of school, my oldest children got off the bus, greeted their visiting grandparents with a big hug, and went directly to the backyard to be bored.   Eventually, with nothing else to do and no one else to play with, they started to play their favorite game: kick the ball on the swing.

Kick the ball on the swing always requires two people. One person swings, the other, in perfect synchronized timing, throws the ball at the exact moment the swinger swings forward. This way, the swinger extends their feet and catapults the ball into the air. The goal is for the ball thrower to catch the ball. But sometimes, the ball goes as high as the branches of a nearby pine tree. Or, even goes over the roof of the house.

This was not the case on that last day of school, where my son had enough of throwing and just gave up, with a pout.

This is where my daughter, who I believed had just finished up the 4th grade, yelled: “That’s not fair, I threw more to you than to me. And there is no one else to play with and I am bored! And I hate you! Now get back here and play with me now!”

This fighting and loving seems to be, according to my neighbor, a favorite form of entertainment for brothers and sisters. I can go through all the parenting magazines like Family Fun or read books like Kids Unplugged. I have art materials and cooking projects ready to go.

And what was the chosen activity of my three children on their first afternoon of summer freedom this year? Hit your sibling with a giant foam pool noodle. THWACKTHWACKTHWACK! Let the summer games begin!