It was just St. Patrick’s Day in America this week.  I couldn’t help but notice all the people decked out in green, so publicly and outwardly showing their Irish pride. People were wearing the green and donning shamrocks in schools and restaurants and supermarkets.

Strangely enough, this visible expression of pride in one’s ethnic identity reminded me of the revelry and costumes of the people of Israel as they celebrate Purim.  Purim is a story of kings, queens, and villans. A holiday of reversals. A holiday of masks, costumes, and feasting. And like St. Patrick’s Day, there is some drinking involved too!

In America, Jewish holiday celebrations take place mainly inside synagogues and Jewish community centers. But in Israel, the planet’s only country with a Jewish majority, all Jewish holidays spill onto the streets and shops. And Purim in Israel is one big nationwide party.  A party celebrating a victory over wickedness that could hold true today. There was a wicked man in Persia back then that we defeated. There is a wicked man in modern-day Persia, or Iran now. Both of these men pledged to destroy the Jewish people. One wicked man defeated. Many more to go.

What could have been a day of great sadness for the Jews turned out to be a day of great joy. And, we are commanded to be joyous, intoxicated even, on Purim.  So drunk in fact, that on Purim in Israel there are special parades called Ad Lo Yada, meaning in English, “That you Shouldn’t know,” meaning on Purim you should be so happy (drunk) you should not be able to distinguish between Mordechi or Haman (boooooo!). Friend or Foe.

Last night I looked up and saw the Supermoon.  While this moon was indeed one of the fullest full moons I had ever seen, it did not surprise me that there was a full moon. Purim,  always falls under a full moon in March. Or, more precisely, the 15 of the Hebrew month of Adar.

As I gazed at this body of luminescence, I took a deep sigh and reminisced about where I saw it three years ago. 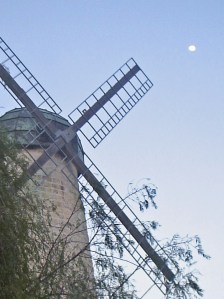 This was the moon I saw hovering over Jerusalem’s Yemin Moshe neighborhood. Okay, from my amateur photo, it was not as big as the supermoon, but it was special all the same.

Then, I caught a bit of CNN’s Piers Morgan’s interview with Israel’s Prime Minister Benjamin Netanyahu.  During commercial breaks, the same old images were shown to the world of Israel: The Kotel, The Dome of the Rock.

Excuse me, Piers, but you were in Israel during PURIM!

Are these tired images all you really can show about Israel? Must Israel always be covered with conflict in the backdrop?  If you got out on the streets of Tel Aviv or Modi’in or Jerusalem, if you could do one sidebar story, you would have wandered the streets and been treated to the following faces:

Halvah for sale for the Purim Feast 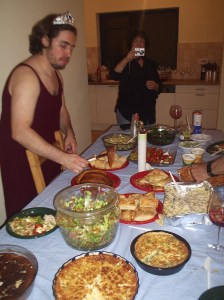 my friend's brother, decked out for Purim, celebrating with a feast at his home 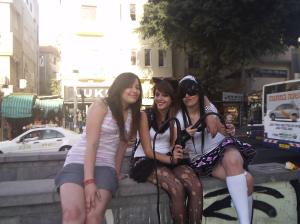 teen girls dressing up and having fun in Tel Aviv 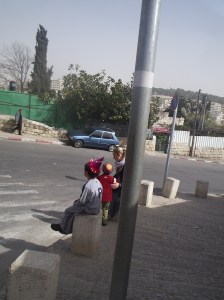 mom and kids wait for bus outside of old city, Jerusalem

Will showing these images make Israelis seem just too normal, too human for media coverage? Would it portray Israel too much for what Israelis are, a people who love to live, who love to celebrate?

Until the media in America show photos like this of Israel, I’ll just have to share my own. And I’ll be taking more. Because we just booked our next trip for this December. Even though it is the first day of spring, I can’t believe I’m saying this, but I can’t wait until the winter.