The Holocaust in Degrees of Separation 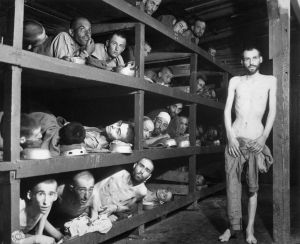 a photo of Jews, including Elie Wiesel and my friend's dad, liberated at Buchenwald

Leon Posen, a congregant from my synagogue, passed last week. He lived to the age of 94, blessed with a long life that could have been cut very short.  His passing is still a sad one.  Leon was a Holocaust survivor.

As the years and decades stretch away from World War II and Hitler’s war against the Jews, there are fewer people to tell first hand accounts of what happened in the ghettos and the concentration camps in Europe.

So  who will bear witness in generations to come? Even if we don’t have a direct personal connection to the Holocaust, it is our turn to hear as many accounts as possible, and then tell them to the next generation. This is the only way to keep the vow of Never Again.

In Rochester, about 300 area Hebrew school kids in grades 6-12 watched their peers put on a play called “What Will You Tell Your Children” written by local playwright Jessie Atkin about her trip as a teen to the concentration camps in Poland. The play focused on the reactions of contemporary teens as they toured Auchwitz and faced anti-semitism and a general lack of understanding of Judaism at home.

I wonder if this new take on the Holocaust – telling the story second-hand and not directly from survivors’ accounts – actually disturbed,unsettled, and horrified the young audience enough to make them really remember. To make them relate. Was it too much of a softball throw in teaching the Holocaust? Is there – should there ever be — a gentle way to teach the Holocaust?  How can it be unforgettable if we do not teach the inhumanity and the horror?

As the students watched the play, I watched the students. And then, I looked them as a whole – a bunch of healthy, creative, sometimes fidgety, teens and preteens. This was the same age demographic that Hitler selected for his Terezin concentration camp in Prague. A room with this many kids, multiply that number until you reach 15,000 kids. That’s how many died in Terezin, I thought. I shivered.

In my Hebrew school, we were spared nothing.  My teacher, Rabbi Tzvi Berkowitz, was born in a displaced person’s camp in Cypress. The one depicted in the historical fiction novel “Exodus” by Leon Uris. He was the child of concentration camp survivors. Because of this, in our Holocaust education, we watched many horrible films shot in grainy black and white of the ghettos and camps filled with emaciated bodies. Some tortured and barely alive, some already dead.

But, still, it happened to someone else’s family, not my family, all those years ago. They were disturbing and yes, the first year I really learned about the horrors, I spent many nights curled up at the foot of my parent’s bed to sleep.

Now, I live in Rochester, a small town with an unofficial, intimate club that no one wants to belong to, yet they are proud members of it.  Rochester has many Holocaust survivors whose families are now second, third and even fourth generation survivors.

It wasn’t until I had friends in this club, that I began to think: if his mother, if her grandfather didn’t survive, than this friend wouldn’t exist, or certain friends of my children would not be here.

Unlike the Yom Hashoah services of my childhood, when it seemed that everyone in my synagogue attended, it seems that Yom Hashoah services are attended mainly by those directly touched by the Holocaust, survivors and their decendants, leaders of the community, particpants in Rochester’s march of hope or our teen trip to the Holocaust museum in Washington D.C. So, going to these events, I still feel, thankfully, disconnected.

But in 2006, I had the privlelege of attending in Los Angeles the United Jewish Community’s General Assembly. That year I was the recipient of my community’s young leadership award, along with my traveling companion, Ron. Ron has the biggest heart of anyone I know, and lots of energy. An entrepreneur, he always seems to have three or four business ventures going on as well as several philanthropic projects. This is the kind of guy he is: we were stuck in an airport on the way home waiting for a delayed flight. It was late and people were crabby. Ron goes to the only remaining open store in the terminal, buys a bag of candy, and walks around, offering candy to the stranded travelers.

One part of the trip, young leadership delegates from around the world were taken to L.A.’s Museum of Tolerance. The museum, chronicles the Holocaust and current genocides in world history.  Sadly, it shows visitors that vows of “Never Again” cannot ring true. In the decades since the Holocaust, there has been genocide in Cambodia, the Balkans, Rawanda, Sudan.  Our docent said that the museum has been a destination of feuding gangs of LA to teach them the consequences of hate.

Further into the emotionally-charged museum, we came to the tail end of the Holocaust exhibit. There, transported from a concentration camp, in the corner of a dark room, was an actual bunk where prisioners slept, stacked three levels deep. Two to three men slept on planks on a bed the width as narrow as a twin bed.  In the background, behind the bunk, was a life-sized photo, a well-known photo of survivors of Barrack 66 in Buchenwald. In this photo,  is an emaciated Elie Weisel. I had seen this photo dozens of time in my life. Then, all of a sudden, Ron grabs me by the arm and points. Impossibly, my friend Ron’s face was peering out from the bunk one level above Weisel.

And that is my degree of separation from the Holocaust. What is yours?

6 responses to “The Holocaust in Degrees of Separation”