What’s that Purple Thing from the CSA and what do I do with it? – CSA week 4

Joining a CSA Farm is like a box of chocolates. You just never know what you’re going to get.

The adventures of my first summer with a CSA continue. Here is what I’ve learned so far:

This week, like last, we received  a bunch of sugar snap peas.

They can be prepared in stir-frys and salads, but my family likes them best raw. Easy enough.

We also received some beautiful purple basil which I shredded and used as a topping for pasta. It’s also good in Thai cooking.

But last week, after getting back from a great trip to see the family back in NYC, I went to pick up our family’s half of the share from our friends. They took the basil because they knew I have a ton of it in my own garden.

What they gave me was this: 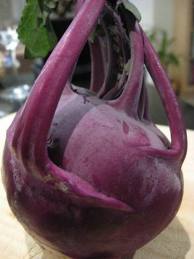 This weird, bulbous thing is called Kohlrabi. It’s pronounced: Call Robbie. It looks like it could have grown on futuristic farm on Venus. Just the sight of it made my sons laugh. I have never had Kohlrabi, neither did our CSA partners, so they let me be the brave one and try it first.

So what to do if you encounter Kohlrabi in your CSA share this summer:

I will wait patiently for the mounds of zucchini and tomatoes we’ll get in our CSA share. But in the meantime, I’ll have fun with this strange vegetable that looks like it was grown on another planet.

4 responses to “What’s that Purple Thing from the CSA and what do I do with it? – CSA week 4”