Tunneling Through time under the Western Wall


After years of waiting, finally I got to take a tour of the passageways below the Western retaining Wall of the Temple Mount, Jerusalem.

In 1967, when Israel reunified Jerusalem after capturing the Old City from the Jordanians, the Jewish Quarter of the Old city lay in ruins.  For nineteen years, Jews had been kept away from their holiest site from the Jordanians. Jordan had destroyed most of the synagogues in the Jewish Quarter. Most of the Western Wall, the remnant of the Holy Temple that stood two thousand years ago and was destroyed in 70 AD, was buried in rubbish.

When Israel recaptured the Old City from Jordanian rule, Israeli authorities pledged that they would restore the Old city and do extensive renovations along the Western Wall, and then continue these restorations to the Southern Wall of the Temple Mount. After decades of painstaking excavations, the tunnels were opened to the public in 2002.

For complete details on the history of these excavations, click here.

When most people think of the Western Wall, this image comes to mind:

Actually, this is only a small portion of the enormous Western Wall that King Herod (truly the Donald Trump of his day) had constructed as a retaining wall to expand the Temple Mount to support the Second Temple.

Today, this massive wall is buried and where over the centuries, the Moslem Quarter of the Old City was built over the rubble.

So, we began our journey under the Western Wall at the extreme left corner of the above photo:

Appropriately, for Chanukkah, our guide was Mattisyahu (no, not that one), originally from Atlanta, who used Toby as a volunteer:

Below the surface, there are narrow passageways, but there are also cavernous rooms. The visitor is taken back to the First Century, the heyday of Jerusalem at the time of the Second Temple.

The Western Wall Tunnels provide an odd mixture of tourists

devout women wishing to pray in the quiet subterranean solitude,

As close as they can get: women of the Western Wall Tunnels 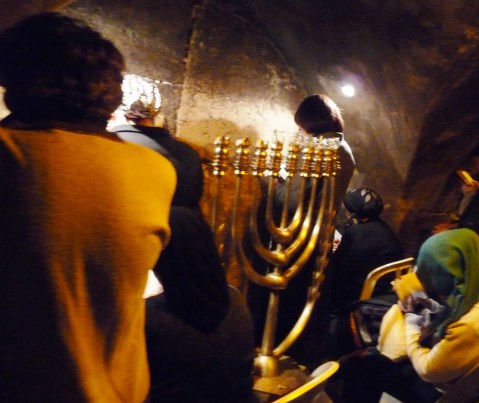 and construction workers.  In the distance, down a tunnel not yet open to the public, there are the noises of hammers and drills as further excavations are meticulously conducted as to not disturb the houses in the Moslem Quarter overhead.  There are new discoveries made every day. 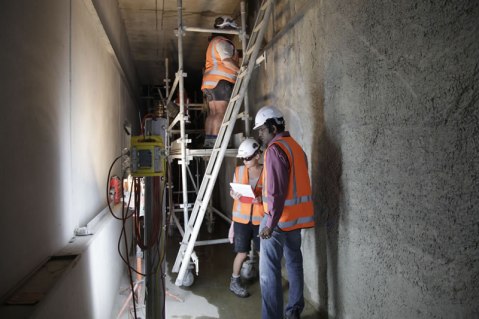 Down here, even construction work is holy.

2 responses to “Tunneling Through time under the Western Wall”