An Ode to 24 Manor Rd North 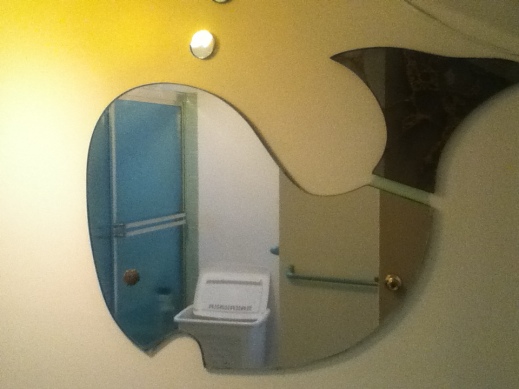 My husband’s parents are about to become transplantedsouth.

This weekend, in the on-and-off rain, my in-laws had a yard sale in attempts to sell off the last possessions they did not want to take with them to Florida.

I got a call from my mother-in-law, asking me one last time if we wanted to take a few last things:

The antique 1920’s style school desk, complete with an inkwell, that resided  in my husband’s childhood room.

The orange and brown stoneware dishes that she used each year for Passover.

Though both these things had great sentimental value, they were remnants of a house that was being left behind, and they just had no place in our present lives. My heart said yes, but my brain said no. We had taken all we were going to take that could fit into our current home. The rest, would just have to live on in memories and in lots of photos.

I’ve been visiting the house at 24 Manor Road North, on a huge one-acre lot, long before I was married. I started going there as a teenager, not long after I met the man who would be my husband at a camping retreat at Camp Ramah in the Berkshires.

In fact, many of you reading this may have also shared great memories at 24 Manor Road N. long before we became the grownups we are today.

24 Manor Road North was host to our youth group’s student board retreat weekend.

United Synagogue Youth members of METNY region gathering at my in-laws for a weekend of studying, learning and hanging out – 40 of them with three bathrooms. My husband was editor of the yearbook that year and we found this copy (where I scanned in this page) in his childhood room.

I never attended one of these weekends (I lived on the other island, Staten Island) but I have heard they were legendary.

40 teens in one house for an entire weekend.

Later, 24 Manor Road N. was home to many “next to New Year’s” parties in honor of my husband’s January 3 birthday.

Craig is wearing a red striped shirt I got him for his 16th birthday. He still has it.

That’s how I came to know the house, long before Craig and I were even dating or married. Long before our kids, and his sisters’ kids  came along.

Now,  after over 40 years of living in Long Island, my in-laws are packing up and heading to their dream retirement home along a golf course in … you guessed it – Boca Raton, Fla.

During these past four decades, they worked hard, raised four children and have done their share of babysitting over 14 grandchildren. They have rightfully and healthfully reached this well-deserved phase in their lives. I am genuinely happy for them. For the grown children however, we are left with that bittersweet realization that you can never go home again.

On our last trip to the house I took lots of photos of parts of the house that I have known forever, and now would never see again.

Like the enormous hedges that seemed to swallow the house with each passing year:

I also took some photos of parts of the house you were NOT allowed to see until you were no longer considered a guest but a part of the family. Like the upstairs “kids” bathroom that my husband shared with his three sisters, the one with the whale mirror:

And then, when you were REALLY family, you could go in the basement. On our last day at the house, we went downstairs  to the basement, already filling with boxes, where my father-in-law asked if we wanted to take some paintings he created long ago

Not bad! reminds me of a Cezanne

We also found remnants from the family business, Fairyland Amusement Park in Brooklyn, that was in my husband’s family for three generations: 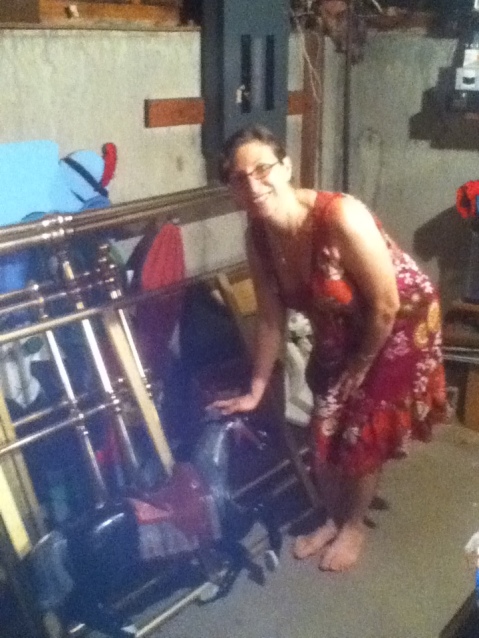 my sister-in-law petting a carousel pony, that’s smurfette I think behind the bars of an old brass bed.

This move has been over a year in the making, and selling the house was tough in the Long Island housing market. To sell the house, little bits of  its personality were smoothed over, creating a clean slate for the minds of potential homebuyers.

With each visit over the last year, the house felt less like the home I’ve visited since I was 16. Gone from the kitchen were the dozens of hanging plants, some living, some just hanging on, that was known as the “jungle” and where, in rounds, children and grandchildren had breakfasts or July 4 hot dogs after cousin sleepovers:

Gone from the stairwell were the photos of my sisters-in-law as kids and collages of grandchildren.
Gone were the artful silver and mauve squiggles that my father-in-law painted on the kitchen walls. 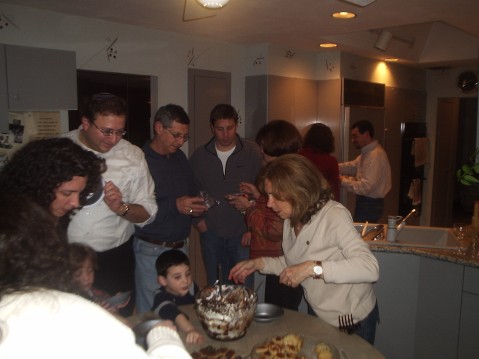 Everything felt neutral. Beige. Only one room, the dining room where we had so many holiday dinners, maintained its burgundy hue. 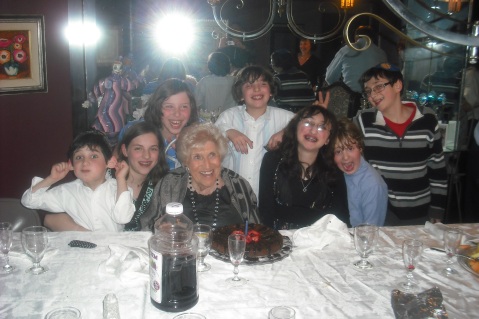 On my husband’s last day in his boyhood home earlier this month, I didn’t rush him out despite the seven- hour drive ahead of us back up to Rochester. He watched one last Wimbledon tennis match with his parents on the big sectional couch where the family and many friends logged in thousands of hours of hanging out.

In the end, we had many great memories at 24 Manor Road North. (Feel free to add your own memories, family, in the comments box.)

We’ll just have to make new ones in Florida.

One response to “An Ode to 24 Manor Rd North”