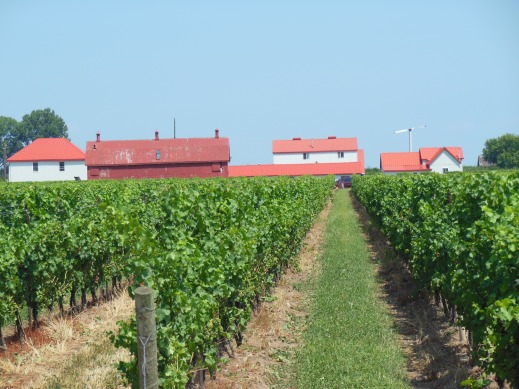 Upon check-out at Niagara-on-the-Lake’s Antique Slumber Inn, after a great breakfast of freshly cut fruit, homemade blueberry muffins and French toast, I was asked to sign the guest book that sat on an — antique — desk.

I flipped through the pages to see what other guests wrote. Our proprietor Cathy, a native of  Niagara on the Lake said, “you’ll find many folks from Rochester in there, it seems like we get a visitor from Rochester nearly every week.”

Niagara-on-the-Lake (on Lake Ontario,Canada, that is) is 100 miles from Rochester, NY , but it feels  at some times as if you have gone abroad.  Canada  is another country, after all. You need your passport to get there. In Canada, where people say “aye” instead of “huh?” in conversation, things are measured in metrics, you will find a wine country that rivals Napa or Sonoma.

First, where we stayed

The Antique Slumber Inn has been in the same  family for five generations. While the house itself is 130 years old, inside it was gutted and completely new, you could still smell the newness of the paint.

The bedroom we stayed in had a cathedral ceiling, an octagon window and our own bathroom – all bright, clean and new. The location was right off the main strip but close enough that , once we parked our car, we didn’t drive it for our entire stay, chosing to walk or bike everywhere we needed to go.

At breakfast, we chatted with a young couple from Luxembourg. They were touring around New York and Canada and we asked them where they had been. As it turns out, on their visit to New York City, they went to the same Yankee game my parents attended, left at the very same time at the sixth inning as the skies opened and thunder roared.

Of course, I asked what else they saw and where they ate, and — if they had any good pizza.

They said that the pizza was very disappointing. I asked them, how could this be, disappointing pizza in Manhattan? Until they told me the only pizza they ate was

Completely mortified, I apologized to them whole heartedly.

As a New Yorker, my heart went out to them. I still think of them now, the poor young couple from Luxembourg who think that Sbarros is New York Pizza.

After consoling the folks from Luxembourg, we were on our way to rent bikes. Bike rentals in town go for about $50 a day, but at our B&B, Cathy rented them out for a nominal fee of $5, just enough for their upkeep. She also gave us coupons at selected wineries for tastings. We first peddled into town to stop to buy some sunglasses at the apothecary.

In the heart of downtown, Niagara-on-the-Lake can make the visitor also feel like they are back in time.  There are Victorian bed-and-breakfasts with vast porches, streets lined with gardens 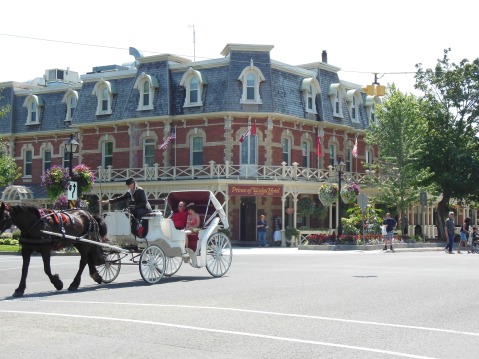 There are even ladies on their way to tea after taking in a play from the Bernard Shaw Festival walking with gloves and parasols:

The wine trail is clearly mapped out with signs bearing a grape logo. Some of our route took us along the Niagara River. Other parts took us along long straight roads called “lines” that went out into the vineyards and orchards. 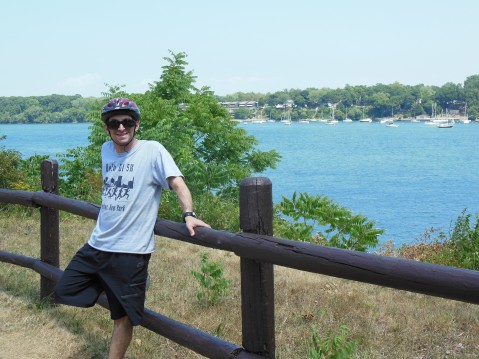 After we cycled across town and through the Commons, our first stop  on our bikes as we traversed the trail along the Niagara River was  Riverview Cellars, where our pourer Greg did an impressive job of switching back from English to French as he  poured for us and a couple from Quebec.

This was our first stop on a WHOLE day of biking and sipping, so Craig took notes on which wine we liked from which winery. Copious notes. The Pino Grigio was a safe choice, but the Reisling and Cabernet, which had hints of leather (so we were told. Yes, it did taste like leather, but that’ what made it taste good) had much more character, and they were our favorites here.

We tried ice wine at Reif, a winery specializing in German varieties of grapes.

And then did more tasting at the Frog Pond, an organic winery:

I was really routing for the wine here. They use no pesticides on their grapes, rather they rely on a bird they imported from Africa that roam free in the vineyards to gobble up the pests. But really, this was the poorest tasting wine we sipped all day. It’s a new venture so maybe they’ll get it right in a few years.

In all, we peddled over 20 miles and sipped from seven wineries.

Be advised, that if you bike and taste, there are police on bikes to check the sobriety of bikers along the wine trail. After my fifth winery, located out on the “lines” – that’s way out in the vineyards, where each “line” road is separated by a square kilometer of vineyard – I was less interested in wine and more interested in water.

So I stopped to get wet by one of the many irrigation devices that sprayed plumes of water into the parched vineyards.

After a 20 mile bike ride, it was great to get back to our inn and rest in the hot tub.

But I still haven’t told you about the Ice Wine slushies. Yes. Ice. Wine. Slushies. I’ll save that for a later post.