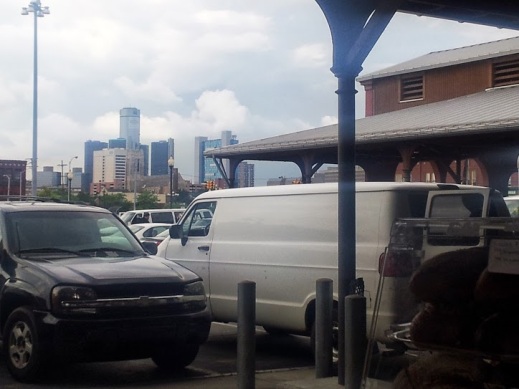 view of Downtown Detroit from the Eastern Market

To my dear readers: This post is mainly about American Jewish culture. It has lots of unfamiliar lingo to those not exposed to Judaism, so my complete understanding if you skip reading this. Or, if you want to get an inside glimpse of what goes on in the minds of practicing Jews in the face of moving to a new place, do read on.

Have you recently entered a house of worship when it is not a major holiday or occasion going on? Chances are there will be plenty of room in emptying pews. Congregations merge with one another as membership dwindles.

This is an age when less Americans seek out organized religion, and regular attendance to religious services in churches and synagogues gives way to baseball and soccer fields. Perhaps it is there, where they understand the cheers for the players rather some antiquated texts and chantings, where they feel the most connection to community.

A rabbi I knew, when confronted with a person who would say: “I feel spiritual but I don’t want to get involved with any organized religion” responded by replying, “Judaism is very unorganized.”

My husband and I go against the grain of our contemporaries. As soon as we move to a new town, and not long after we purchase a home, we go looking for our second home, a synagogue or shul.  It’s not because we have kids that need to go to Hebrew school. It’s not because we need a Bar Mitzvah date. It is because, away from family, we need a community.

Fortunately, we have many choices in a city with a Jewish population of about 70,000. That more than three times the size of the Rochester Jewish community we left.

We went to two different synagogues. Were we ignored? Did we sit quietly praying unnoticed?

The first house of worship we entered, about four individuals approached us – during the Torah service to find out our story. Were we from out of town? Visiting? Just moved here, well WELCOME! Eyes in pews across the aisle in faces middle-aged, elderly, familiar and unfamiliar all at once, turned our way to see the newcomers in their midst. One congregant, through family connections to the Jewish community in Rochester, actually was told to look out for us.  The men on the bimah threw a stern look our way to be quiet as he whispered about the degrees of separation on how he was connected to Rochester. Another man approached us and asked if our nine-year-old son would like to lead Ein Keloheinu or Adon Olam from the bimah. These are prayers at the end of the service usually bestowed to be led by children. I knew my son knew these prayers cold, and he is not a shy kid. But still, we just got here.  As I expected, with a smile, he turned the invite down. He has been such an easy-going kid through this whole process, but he is a kid and it was too soon.

The next Shabbat morning, in the second synagogue we tried on, came an even warmer response. The welcomes. The excitement of the newness of us.  An older Israeli woman who sat in front of us explained: “You see? No matter where you go, the siddur, the words, the Hebrew prayers and melodies? They are all the same. No matter where you go you are always home.”

We were honored with an Aliyah to the Torah. In my experiences in our former synagogue, this is not something that was bestowed upon us until we were members for several years.

My son spent some time in the service and some time playing cards with about seven other children in the social hall. The fact that there were seven children in the synagogue in the middle of the summer was a promising sign. During the lunch after services, we were introduced to more people who were excited and passionate to tell us about their congregation.

The third synagogue I went to alone.  It was Jewish Detroit’s community-wide observance of Tish B’Av, meaning the ninth day of the Hebrew month of Av, the saddest day on all of the Jewish calendar. It is the day when in Jerusalem, both of the Great Temples were destroyed, when the Jews in ancient Israel began their exile from their land, an exile that lasted two millenia. On this day history recorded countless other acts of persecution and massacres put upon the Jewish people including the Spanish Expulsion of the Jews.

I only began to observe this somber, little known holiday in the summers my children started attending Camp Ramah. To add to the somber mood, worshipers remove their shoes, sit on the ground. Under low lights, and at camp, with the aid of only a candle or a flashlight, the Book of Lamentations, or Eicha, is sung to a haunting chant. If you’ve never heard it, take a short listen here and the sadness comes through even if you don’t understand the Hebrew.

I sat alone on the floor, shoes off as a symbol of communal mourning. Each chapter was chanted from a member of a different area shul. Yet even when sitting alone, I never feel isolated or a stranger within a shul. Even after two weeks, there were some familiar faces. The guy with the Rochester connection who was told to look out for us sat nearby. The young woman rabbi from the first shul. I watched her as she sat on the floor, followed along in the prayer book for a while and then watched her as she closed her eyes just to meditate on the sadness of the chanted words.

And the words are indeed sad. It is sadness of Jerusalem likened to a raped woman. Childless and friendless abandoned by all humanity. Her streets are filled with ragged people walking through burned out ruins. It was a time when Gd, because of our baseless hatred and corruption, delivered us into the hands of our enemies.

As I read the words of the Book of Lamentations, both in Hebrew and English, another city came to mind. The city to where I just moved. With its blighted houses and skyscrapers. With its government on the brink of bankruptcy.

But then, in the last chapter, hope.

In the back of the synagogue were some very young faces. White faces and black faces. But all young faces. These were the congregants of the Downtown Detroit Synagogue. Founded in the 1920’s, it is the last standing synagogue in Detroit proper. And instead of aging and decrepit members, its members were young. Way young.  These were the determined young people living in urban Detroit. Waiting for Detroit to come out of its destruction. Making it happen by living and working in downtown Detroit and not like the rest of us in the ‘burbs.

In our shul shopping quest for the ideal synagogue for our family, I know that this synagogue is not the one we will be joining. But out of all the synagogues I have visited or heard about in Detroit, the existence of the Downtown Detroit Synagogue is the one that gave me the most hope.