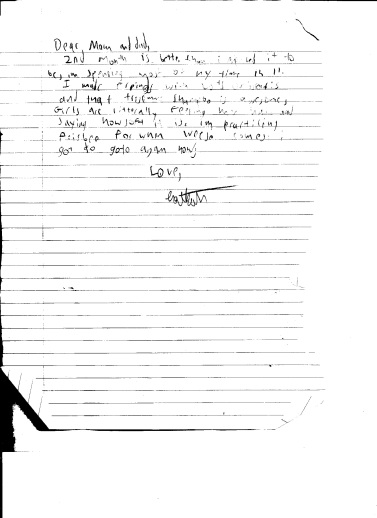 Now, if I were to write all my blog posts in this style – one devoid of sentence structure,  or any clarity of thought –  I wouldn’t be much of a writer. And you would absolutely be in the right for clicking away from this blog in disgust, murmuring aloud, “Where does that woman get off thinking she can write!?”

However garbled the messages may be, letters from camp are regarded as true literary works from their loving parents.

And I know my son is a writer.  He has been writing funny stories for school and just for kicks as long as I can remember. Like his fifth-grade essay assignment about his first roller-coaster ride. His teacher told us that in this essay he had a great sense of voice and composition.

But, for some reason at camp, all rules learned about writing – sentence composition, transition of thoughts from one paragraph to the next, and even legible handwriting are cast aside for the sake of getting back in the game of swimming, water skiing or just plain hanging out with your bunk mates.

I’ve been inspired to share one — just one hand-written letter of several we received from our three children — by several blogs, including Letters From New Jersey, who shares the letters she writes to her children at camp, and renée a. schuls-jacobson, who is holding a hand-written letter to camp contest. Her son at camp is the judge on the best letter. Go check these blogs out, you wont’ be sorry!

With all this blogging material on camp and letters out there, I tried to avoid the subject. Until I got the letter below.  It left me in such a fit of laughter on my front lawn I just had to share it. Here it is!

What? You didn’t get all that? Can you not read?

It’s okay. I have become quite the sleuth decoding and deciphering my 15-year-old’s harried handwriting. Seriously, is there a place where they pay you for reading horrid handwriting? if so, I have found my new calling.

Just be glad that this was not written on a crag of a stone in the dark, as he claimed was the writing surface of his last letter.

And it reads, unedited for punctuation, as such:

2nd month is better than I expected it to be; I am spending most of my time in (bunk) 11. I made friends with lots of Israelis and that Tresame shampoo is awesome, Girls are literally feeling my hair and saying how soft it is. I’m practicing frisbee got to go to the Aga’am (lake) bye.

He’s actually washing his hair now?? To the point that girls, not just one girl but girl(s) in plural – want to touch his hair?

A whole year last year of nagging him to better wash his hair, of saying, not a drop of water touched your hair in that shower, how can it be CLEAN?!

And now, my son has silky soft, clean and touchable hair!

You can learn a lot from a letter from your kid at camp. I’ve learned to buy Tresame by the gallon.

You have learned that you may want to buy stock in the company which makes Tresame.

3 responses to “Dearmomanddadhiloveyoubye: Letters from Camp”