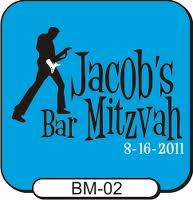 The other night, we had a family outing to a very large fair. The kids rode on typical fair rides that spin you around and hurl you upside down into the air after eating typical fair fare like corn dogs and fried dough.

I am not a big ride person. At all. But I do like to people watch at carnivals and fairs.  I like to see what people are wearing, or what they are not wearing enough of so everyone can see the writings or etchings that cover their arms and legs in the form of a tattoo.

At least, under those summer carnival lights, there is still somewhere left on earth for self-expression.

Today, my 5th grader came home from school. His shirt was inside out.

Did I miss the note that today in school was inside out day? It’s late May. I’m kind of done with checking homework, checking notes.

No. A teacher in school made him turn it inside out.

The shirt was “too religious.”

The shirt in question said: “I rocked out at xxxxxx’s Bar Mitzvah”  It was black and had a guitar emblem on it hand designed by my daughter artist-in-residence. You would think that an art teacher would have admired the shirt for its individuality. But no, she in front of the whole class made my son wear his shirt inside out for the rest of the day. No one had paid any mind to my son’s shirt until he was asked to turn it inside out.

The shirt was leftover from his brother’s Bar Mitzvah.

From three years ago.

You can blame me, teach, because he has so many of that shirt in his drawers and there was probably no other shirts left because I’m a bit behind on the laundry.

Initially, I became furious that my son could not wear anything “religious.” Would a Christian kid be asked to remove a cross? A Muslim kid remove her hajib? God in heaven, I hope not.

So I called the school with my concern and calmly (okay, NOT calmly) explained the situation.

“Oh yes, kids are not supposed to wear shirts they get from Bar or Bat Mitzvahs. It makes other kids feel …. bad.”

Sorry, but I guess I never got that memo either. Because my son, and his brother and sisters, have tons of T-shirts from Bar Mitzvahs. And sports teams.  And youth group weekend retreats.

In fact, if it weren’t for all those shirts they received when they worked the Bar/Bat Mitzvah circuit, why, they may have not had any clothing that school year at all!

Giving out T-shirts, or for those high-end B’nei Mitzvah parties, sweatshirts (!) has been the popular party favor for decades.

Let’s examine how other items of clothing, or any other actions we do, may make people feel excluded. If we are really going to take inclusiveness to the highest level, perhaps school boards should consider banning the following items of apparel:

Sports or athletic clothing: Lots of kids wear varsity clothing and some may even have varsity letters. This may make the non-athletes around them feel sad or unsatisfied with themselves.

Concert T-Shirts – I remember in high school the kids who spent all their money, or got money from their parents to go the hottest tours and they would wear their T-shirts that they bought from that concert that very next day. I remember thinking how much I too would have loved to see that band and then …. I got over it.

Vacation T-Shirts: When kids from families who can afford plane tickets during peak vacation time return from Florida or their time share in the Caribbean, it makes the white, pale pasty kids who didn’t escape to somewhere warm feel very excluded.

Designer clothing – My son speaks of a classmate who he swears gets a new pair of $200 sneakers every other week. That could make anyone -ANYONE – who is not a Joneses – feel excluded.

I presented these ideas to the principal when he called me back. I asked him if, during the months of October through December, if he could make sure that there would be no showing of anything red and green, or that no one in school wears Christmas lights or ornaments as necklaces or earrings, or that no one be allowed after Christmas to wear any sweaters with reindeer or candy canes or snowflakes or fir trees on them.

Want to see the dress code rules? Here they are. Please see if you see any mention of Bar/Bat Mitzvah or any party swag in here:

14. STUDENT DRESS
District students are expected to dress, groom, and attire themselves in a manner that is not
potentially dangerous, does not distract others or disrupt education, and does not convey a
message contrary to District policy. The following are examples of dress, grooming, and attire
that may violate District policy. This should not be considered an exclusive list.

Distracting or Disruptive Items:
Clothing that exposes or draws unusual attention to breasts, buttocks, or
genitals; styles that expose undergarments; bizarre clothing, grooming or attire that
focuses attention on a student or group of students at the expense of learning, such as
nightwear or beachwear, etc. Students must wear shoes.

What are we doing when we have rules that go to the extremes to coddle the middle schoolers  feelings?

We do our kids no favors by not teaching them to start developing a tough skin and not to feel disappointment. Yes, have a tender heart, but start thickening that skin by age 12 or 13. So it won’t hurt so badly the first time you get rejected. By a college. Or a boy. Or a job. With that tough skin, you know it will hurt for a little. And then, you’ll go on.

Know now, starting in middle school, that even the most seemingly popular kids are frightfully insecure, and all you need in life is a few good true friends.

You don’t need everyone to be your friend.  But you need to find that bunch of friends who will include you for YOU. Not because you are going to have the fanciest Bar Mitzvah in town and give out the best T-shirts.

Better to learn in middle school, that no, you won’t get invited to every party. You may or may not go to prom. But you’ll know the kids who did, because guess what, in HIGH SCHOOL, along with that expensive prom ticket, guess what you get to wear Monday in school?

A sweatshirt. Saying you went to prom.