Have Blog will Travel – follow the adventures of Carole Rosenblat, founder of DropMeAnywhere.com 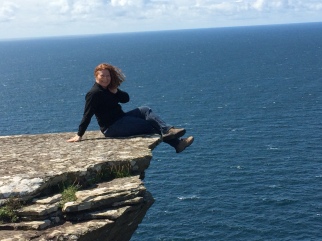 Carole Rosenblat, founder of DropMeAnywhere.com, was dropped into Mexico on one of her voted destinations. She is here with a group of children working on a literacy project outside a village’s local library.

It is still very cold in Detroit, and let’s face it, most of the Northern Hemisphere.

People have simply turned into Popsicles.

In fact, the hot ticket item right now, according to the travel industry, is a ticket anywhere south of the Border.

Even though it was no warmer in Budapest, Carole Rosenblat, the founder of the travel blog www.DropMeAnywhere.com, didn’t seem to have the winter blues. She catches snowflakes on her tongue, explores Europe, goes to pubs and cabarets at night, and does good deeds and meets fascinating people while she is doing it during the day.

Here is my story about Carole from this week’s edition of the Detroit Jewish News.

Readers, do me a few favors:

If you enjoyed this article, and you like to travel, write me in the comments and let me know. I will even tell you where Carole is going next!

If you are not getting the Detroit Jewish News, please subscribe, it is worth a read for Detroiters Jewish and non Jewish alike with movie and local theater reviews and restaurant reviews (yes, the non-Kosher ones too!)

Some travelers leave nothing to chance. They book an entire itinerary to the second, down to the restaurant and the hotels, long before they hit the highway or the runway.

Then there is Oak Park native Carole Rosenblat, an intrepid single woman traveler and founder of a unique interactive travel blog called http://www.DropMeAnywhere.com. It is one of the only travel blogs that asks followers to vote on where Rosenblat should travel next and to read all about it as her “virtual” travel companions (who will hopefully offset her travel expenses with some donations of “real” frequent fl yer miles).

Before each journey, she sets up a voting poll, open for almost a month. Within days of the close of the vote, she packs up, books a ticket and lands wherever her readers take her. She worries about the details — like where to stay and eat and play — when she gets there.

“Think of Drop Me Anywhere as Eat, Love, Pray meets the blog Julie & Julia, as written by columnist (of Sex and the City) Carrie Bradshaw,” Rosenblat, 49, said as she was interviewed over Skype from a Budapest fl at she was renting in the city’s Jewish quarter. After the interview, she planned to venture out for a night on the town to check out a burlesque cabaret show with some new friends she made while volunteering for an organization that feeds Budapest’s hungry and homeless.

In Budapest, she wrote both about the evidence of the darkness of the Nazis’ massacre of the city’s Jews, to the vast restorative efforts to preserve and renovate the Dohany Street Synagogue, Europe’s largest synagogue

“I see my heritage in cities like Budapest,” she said. “It is nice when you are living out of a suitcase to feel touches of Judaism.” Though she said she does not feel afraid, even with the rise of antiSemitism in Europe, traveling solo can feel a bit isolating. It was most pressing during her recent stay in Berlin where “it was hard to strike up a conversation because even though people do speak English, they choose not to over German,” she said.

This kind of travel, where one lives on the edge of her comfort zone and perhaps the end of her fi nances, is more of a life journey than a vacation. She is constantly working to keep her readers, whom she calls her “virtual traveling partners,” updated on her blog with detailed journal entries and many photographs. She couples the Drop Me Anywhere project with work she does on a second blog called RebelWith-a-Cause.

For this blog, she writes about the tikkun olam work she does for local causes in each country she visits. In St. John’s, Newfoundland, Carole volunteered with Spirit of Newfoundland Productions at the Mount Pearl Frosty Festival and helped serve dinner. She also helped sell bricks to raise money to restore the group’s home in the historic Masonic Temple. In Germany, she volunteered in the Bremer Story house museum, which employs the homeless as theatrical historic actors.

Rosenblat is no stranger to traveling. Before she launched DropMeAnywhere.com, she had more than 20 years of experience in international tourism, had visited more than 52 countries, and most recently clocked in 80-hour weeks as manager of youth activities for the Disney Cruise Line. For many years, print and online media sought out her writing or wrote about her travel experiences. So much so that after a while, she wondered if she could document her worldly travels and eventually write a book.

She bounced the idea off veteran travel writer Christopher Elliott, author of How to be the Worlds Smartest Traveler. He told her to “go for it.”

“I’m fascinated by her intrepid spirit and sense of adventure, and I think her readers are, too,” said Elliot, who has been advising Rosenblat on her blog. “Carole has taken a love for travel and turned it into something most of us can only dream of. I count myself among her followers and admirers.”

Since she launched her travel experiment about one year ago, her nearly 2,000 followers “dropped” her onto St. John’s Island in New Foundland, Canada, a trip down Oregon’s Willamette River, Ireland and, currently, a trip to Germany and Hungary. With each destination, Rosenblat attempts to meticulously chronicle every experience — good and bad — on her blog. Her posts go beyond the usual reviews of where to stay, what to see and what to eat.

For example, during her latest travels in Europe, she goes into detail about the pitfalls of buying the wrong rail ticket — only to try to exchange it in broken German — to taking in the famed thermal outdoor baths in Budapest to fi nd out that some of her fellow bathers were Michiganders. Among all the details of her adventures, Rosenblat hopes to convey to her readers not only pointers on what she has experienced, but also to convince them to leave room in their schedules to wander around and make their own discoveries.

“Lots of people go away heavily scheduled with every second planned,” Rosenblat said. “The trick of traveling is if you plan every minute you may really miss out on last minute encounters — like asking the locals where they like to go to eat or what they like to do for fun.” At the end of each trip, she posts a summary of her expenses, her top tourism picks and acknowledgements of thanks to those she met along the way. There are also links to vote for her next destination. As of the end of February, it was a tossup between India and China.

Even though it has been decades since Rosenblat has lived in the area, Detroit is still her home. She said it is her upbringing of growing up around Detroit in the 1970s that has given her the street-smart edge and the confidence to be able to travel to foreign places, keep an open mind to people of different cultures and backgrounds, yet keep her guard up to feel safe and confi – dent while traveling solo.

“It is very exciting to see a single woman demonstrating that it is perfectly possible to take that plunge and live a fulfilling life, one where you can explore the world and enjoy yourself,” said high school friend Emily Eichenhorn, 52, of West Bloomfield, who reconnected with Rosenblat several years ago over Facebook.

“I know she worked very hard to be able to enjoy this part of her life, and she is setting a great example to other women who also want to set out and see the world.” It was no easy decision to pursue this dream full time. To fund her passion for travel, she sold her car and many of her possessions and dipped into her life’s savings. To save money, she skips staying in hotels and instead rents homes and apartments or even spare rooms through the website airbnb.com. She found a reasonable deal in Berlin by cat sitting for an opera conductor who was working out of the country. As she writes in her blog, Rosenblat is a believer in refrigerator magnet philosophy. A refrigerator magnet back in her Phoenix home, a home she is currently renting and hopes to sell, reads,

“Take a leap, and the net will appear.” “When you first fall in love, you feel like a better version of yourself,” Rosenblat said. “That is what travel does to me. Travel is my lover. I do not know how long the money will hold out, or if I will make any money by documenting these adventures, but for now, I am very happy.” RT