“Just Another double Murder.” Here is proof that #NPR no longer even tries to hide its anti-Israel bias 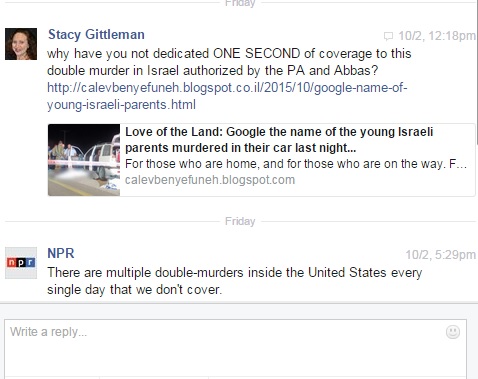 Sukkot. The Feast of Booths. In Hebrew, the fall Jewish holiday is also known as “Zman Simchateinu,” the time of our joy.

Sadly, this week has been anything but.

It has been a season of Jewish blood.

It has become a season of terrorizing Jews in their own Jewish homeland.

It has become a time of complete isolation for Israel and the Jewish people, when at the United Nations not even the United States, with Kerry boycotting Netanyahu’s speech, stands strong with Israel.

Last week, I watched in horror as the Palestinian Flag, the same flag that was waved in triumph by throngs of celebrants in Judea and Samaria on 9/11 – was raised in recognition at the United Nations.

I was disgusted yet hardly surprised, at the raising of this flag, when Abbas announced in his speech to the United Nations as Abbas said his people are no longer held to the stipulations to the Oslo accords, as if they ever did have peaceful intentions of co-existence.

A shred of me was hopeful. If these people really want a nation, than perhaps that wavering flag would signal them to show the world that they can indeed conduct themselves with peaceful dignity. That they are ready to do the hard work it takes to create a country. That they are now more concerned with building up a nation of their own rather than destroying another.

In the morning, I woke to the news – on my Facebook feed, that a Jewish couple   driving home from a Sukkot celebration were murdered by Palestinians in cold blood as four of their children sat in the back seat.

So, I turned on #National Public Radio and I waited to hear the coverage. Surely, after they dedicated so much coverage to another senseless death in Jerusalem when Israeli extremists torched an Arab home in Jerusalem, killing a baby and burning other family members.

Yes, the news cycle was a crowded one: another mass shooting. Another hurricane barreling towards the East Coast. Th endless war in Syria.

But surely, there must be some time to dedicate 1 minute, 30 seconds to report the murder. Especially since Abbas’ Fatah Wing declared full responsibility immediately following his scathing speech at the UN General Assembly.

I questioned them directly in a message on their Facebook page. Here, I screen captured the exchange: 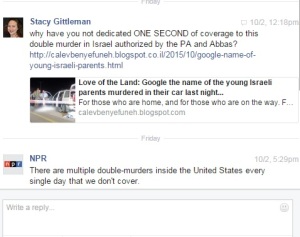 Does this lift any doubt just how blatantly biased NPR is towards Israel?

Are you really still a supporter of NPR?