Post a photo of your Front Door Mezuzzah: A social Media Experiment 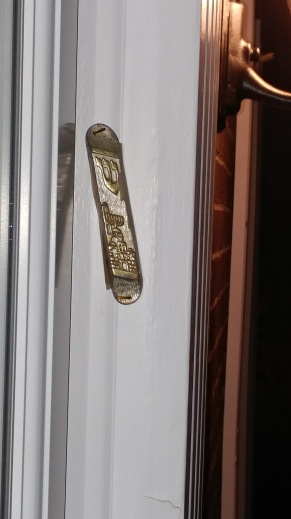 I am beyond fed up.

Really, I have had it.

There has been a LOT of anti-Semitic (it doesn’t sound harsh enough, so let’s just say it for what it is: Jew hating) incidents in the last several months.

Bomb threats called into JCCs and Jewish Day Schools. Yes, they were called in by a Jewish teen sitting in his room in Israel, but they were and still should be dealt with as a hate crime.

Desecration of cemetery headstones in Jewish cemeteries in several cities.  In fact, the headstone of a great grandfather of one of my daughter’s friend was vandalized in Rochester, NY.

Hate emails going out to Jewish students at the University of Michigan. My friends’ son was the recipient of one of them.

And now, a former colleague of mine posts that his front door mezuzzah, which belonged to his wife’s grandmother, was ripped off from the door of his apartment in an inside hallway in a security enclosed building.

The Mezuzzah. Let’s explain to you – and if you are a warped hate mongering ignoramous who knows nothing about Judaism, let’s get you Hebrew Schooled, shall we?

I am no Hebrew scholar, and I don’t know if there is a direct translation to English, but a mezuzzah is a piece of parchment paper where, written in hand by a scribe, is the Shema – the Jewish affirmation calling all of Israel to listen and understand that there is only One Gd and this Gd commanded us to post this prayer into all our door posts and teach it dilligently to our children. There are three paragraphs rolled neatly into a tiny scroll, that is the mezuzzah:

“And you shall inscribe them on the doorposts (mezuzot) of our house and on your gates” (Deuteronomy 6:9, 11:20). What is to be inscribed? Divine instruction is very clear: “The words that I shall tell you this day”: that you shall love your God, believe only in Him, keep His commandments, and pass all of this on to your children.”

The mezuzzah encasement, artistically, is open to many interpretations. Some are simple, some are more ornate. But they clearly mark and distinguish that in that dwelling dwells a Jew.

You may, in old apartments in Brooklyn, that once had a lot of Jewish tenants, see the slanted remnant, now covered in layers of paint. My African American neighbors who lived across the street from me in Rochester still had a mezzuzah on their front door, left by the previous Jewish owners of the house. I asked them why they never took it down. They said, they felt protected by it.

Indeed, some interpret the mezuzzzah they post to one’s doors as a sign of protection. Often, the Hebrew Letters, Shin Dalet and Yud – spelling Shaddai, a name for Gd, is translated to “Protector” or Guardian.

It is customary, when one Jewish family sells their house to another Jewish family, to leave their mezzuzot behind, or at least one as a symbolic gesture.

Though, in Nazi occupied Europe, Jews started taking them down for fear they would be turned in. Sadly, in Europe today, Jews are thinking twice before affixing this quintessential symbol of a Jewish home to their doors.

This is America. And I’m not taking my mezuzzah down.

Here is my front door Mezuzzah.

It was given to us as a wedding present nearly 24 years ago by a college friend. From the day we got it, my husband and I decided it would be our front door mezuzzah, and it has held this status for four different homes now.  And there it will stay. We are not moving or removing it for anyone.

In addition to our front door, every doorpost in our home, except for the bathroom doors, have a mezuzzah attached.

Most were gifts and I can remember each person who gave us each of our mezzuzot. 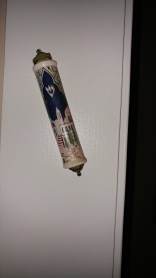 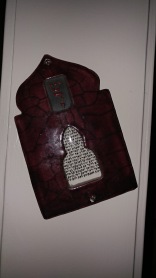 So, here is the social media experiment:

In solidarity with my friend’s mezzuzah which was just vandalized, let’s show the haters we are not afraid.

Please email me photo of your front door mezuzzah to stacy.gittleman@yahoo.com. And please share this widely with your friends, family and community.

Let us bring light into this dark world.

2 responses to “Post a photo of your Front Door Mezuzzah: A social Media Experiment”