The Torah Scrolls on the Floor 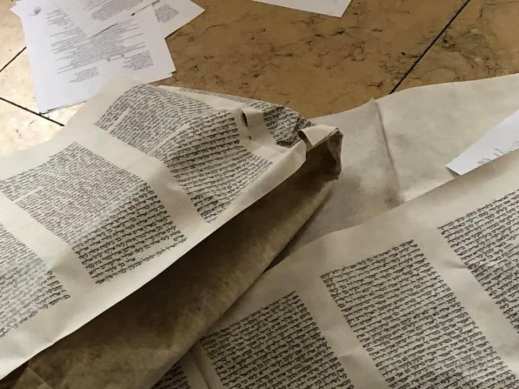 Looking for drama on Saturday mornings?

Each Saturday morning during Shabbat services, no matter what city you live in or what flavor of observance a synagogue or temple may ascribe to, there is that moment of truth. The moment when the person given the honor of lifting the Torah, or hagbah,  lifts the open Torah scroll above their heads, turns around for the congregation to see the letters, and then sits down in a chair where he is assisted by the galilah, the Torah dresser, who wraps the Torah, fastens it with a silken belt, places the cover back over the Eytz Chayim, or wooden posts, and adorns it with a silver breastplate depicting the twelve tribes of Israel. The galilah then replaces the silver pointer hand, or yad, and then finally the beautiful Keter, or crown, is placed atop the wooden posts.

Sometimes while lifting, the Hagbah shows three columns, sometimes, if they are really strong, four or five columns.

At this crucial moment in the Torah service, there is a certain element of danger in the air. We all rise as the Torah is lifted. Out of respect, yes, but also knowing that we are all in this together if the Torah lifter does not get it just right.

The suspense is especially stronger if we are at the beginning or end of the Torah cycle; when the Torah is scrolled way to the left or the right. For if the hagbah loses their grip or if their strength gives out, to drop a Torah scroll is a grievous mistake. To see the hagbah struggle or even tip slightly under the weight of the Torah elicit responses of gasps and “oh no’s” from the congregants and quick assists from the others on the bimah to steady the scroll from falling. And a feeling of relief and handshakes of “Kol Hakavod” after the Hagbah steps down from the bimah and returns to their seat in the congregation.

So serious of an offense, that on the rare occasion when a Torah scroll does fall to the ground, the offender must fast for 40 days. To reduce the severity of this consequence, oftentimes, a congregation will divide the 40 days to 40 congregants.

This is why so many are hesitant to perform the mitzvah of Hagbah for fear they might drop Judaism’s holiest possession.

If you had an observant Jewish education, you were taught that our prayer books: our Siddurim, our Chumashim, were NEVER to be on the ground.  If you do drop one, as kids often do, it is customary to give the book a kiss, because these books have Gd’s name in it. The same goes for our talit, or prayer shawls with the fringes that represent the Torah’s 613 commandments. None of these things should ever touch the ground out of pure respect.

When Torah scrolls and prayer books are so old and worn they can no longer be used, they, with prayer shawls, are buried in a Jewish cemetery.

In many synagogues, you may see a battered Torah scroll, or a fragment of it. Water stained. Singed. Enclosed in its own glass case or hanging in a frame.

These are known as the Holocaust Torahs, which the Nazis confiscated and kept in barns or stables, to one day be placed in a museum to show off how the Third Reich had thoroughly extermined the Jews from the face of the Earth.

So, when I woke Saturday morning to learn that some ….. thing, some thug, some subhuman walked into the Nessa Synagogue in Beverly Hills and trashed its insides.

And tore our prayer books. And threw our talit on the ground.

And threw and unraveled our precious Torah scrolls to the ground.

My heart and soul went into a state of mourning.

What the shock must have felt like to those early risers who were first to arrive for Shacharit services that morning.

Did they think they were in Beverly Hills?

The image of a naked Torah scroll lying on the ground to a Jew is visceral.

What animal would do such a thing? What rhetoric or “free speech” did they hear to spurn on this act of hate?

So Jews.. what are we going to do about it?

Chanukkah. No, No, it is not the Jewish Christmas. So for Gd’s sake, stop competing with it like it is.

Just, on your debates on whether we should have a stupid Chanukkah bush or oh how cute Chanukkah Harry is and oh my kids feel so left out during Christmas…. so we make a big deal out of Chanukkah with presents and we get a bush….

It marks a time in OUR SHARED Jewish history when, in 164 BCE the greatly outnumbered Maccabees in three years defeated the Assyrian Greeks and liberated Jerusalem and when they got to the Temple on the Temple mount they found it to be completely trashed.

And they adjusted their energies from defeating their enemy to then rededicate the Temple and thus rededicate the Hellenised Jews in ancient Judea back to a Jewish way of living.

In the aftermath of the Nessah Synagogue desecration, which, even in this year where haters have defaced synagogues, beat up on Jews and most recently, even killed Jews in Jersey City, what Jews need to do now is find some strength. And Light.

Nessah, if I’m reading that correctly, in Hebrew means miracle.

During Chanukkah, we celebrate the miracle. Not about the oil lasting, but that the Jews had the strength to battle on.

We must battle on. Now is not the time to hide or shrink into the darkness.

That can mean speaking out against Jewish or anti-Zionist hatred from wherever or whoever is spewing it.

That can mean attending services or make a minyan for someone on mourning.

Or, it can mean celebrate Chanukkah for what it is.

Not a Jewish Christmas.

But a time to rededicate ourselves as Jews to our strong, proud, Jewish path.

3 responses to “The Torah Scrolls on the Floor”