The other grew up in the progressive urbanism of Austin, Texas. 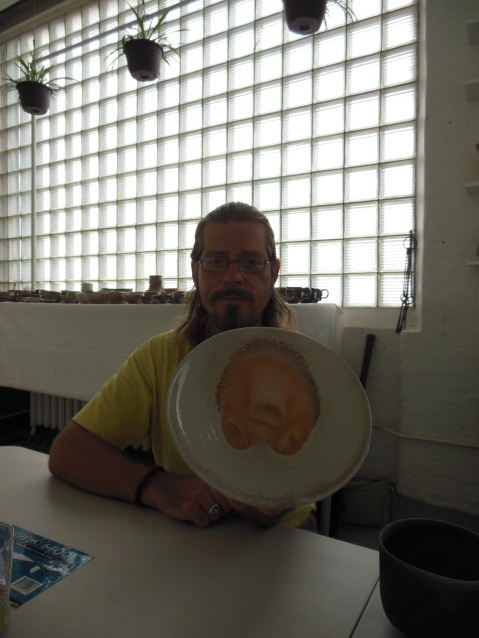 One was raised in Buddhist teachings. The other came to Buddhism in his teens.

One way or another, they found themselves in Rochester.

This Friday, come check out their shared venture in the Kuma-Gama Clay Studio and Tea Bar.

Over a glass of freshly brewed hibiscus iced tea, I had the opportunity to interview them both.

Here is their full story which I profiled them in the Democrat & Chronicle:

Within Japanese culture is the aesthetic of Wabi-Sabi.

Rooted in Buddhism, this philosophy draws attention and appreciation to life’s everyday simplicities. It asks the follower to seek out beauty in unobvious places, such as the gnarled and twisted texture of a tree branch or the irregular jaggedness of a stone.

In many ways, Rochester is a Wabi-Sabi city, says potter Cody Kroll, making it the perfect place to create his imperfectly shaped sculpture and Japanese tea ware.

“Rochester is … not perfect, and it is unfinished,” says Kroll, an Austin, Texas, native. “That’s the way I make art, by always keeping in mind that nothing is perfect and nothing is permanent.”

Kroll was working out of a small studio in the Hungerford Building and selling his work on etsy.com.

While online, he met Niraj Lama, a native of the Darjeeling region of India, who was selling his Happy Earth Tea online. Lama is a newcomer to Rochester, and when the two realized they lived in the same city, they met in person and a business venture began.

They will open Kuma-Gama Clay Studio and Happy Earth Tea Bar in a larger space, Suite 228, in the Hungerford, 1115 Main St., during First Friday this week.

Kroll’s work will be on display, and Lama will provide a history of tea, as well as tastings.

Kroll’s interest in Japanese culture came early in his life. His grandfather was a Marine stationed in Japan and brought him some pottery. Kroll studied fine arts at Eastern Kentucky University and State University of New York at Buffalo. He has been influenced by 16th-century and modern Japanese glazing techniques from artists such as Kanzaki Shiho and Suzuki Tomio.

In the spartan space of the Kuma-Gama Clay Studio, light streams through industrial glass block windows onto whitewashed walls. From outside, one can hear the clank and whistle of a passing train on the railroad tracks behind the building. Cinderblocks support a shelving system of wooden boards that display Kroll’s creations.

On these shelves, the visitor shouldn’t go looking for a matching tea set of identical cups fashioned with traditional scenes.

In his own primitive “impressionistic” style, Kroll strives to capture the fleetingness of a single moment on the surface of his earth-toned works, sometimes in a glaze that seemed to be fired in a kiln while it was still dripping, sometimes in unglazed parts of a piece that capture his fingerprints.

Though each piece is a one-of-a-kind creation, when a few are assembled, they suggest an eclectic harmony and the ideal vessels for a formal Japanese tea ceremony or the enjoyment of a single cup of tea.

Kroll says because Japan is an island nation, each has its own distinct style and uses resources found nearby. So too does Kroll, who only uses locally dug clays, such as what is found at the bottom of the pond of the Folk Art Guild of Rochester in Middlesex, Yates County. The glazes Kroll uses are made from ash taken from wood-fired ovens of local restaurants.

Everything about Kuma-Gama Clay Studio takes sustainability into consideration. The Hungerford Building has been repurposed from an old fruit-packing plant to a place where local artists work and live. Tea is served from an old piece of furniture found outside the hallway in the studio. It was refurbished into a tea bar and adorned with polished tin ceiling tiles also found in the building.

When Kroll moved to Buffalo in the early 2000s to earn his master’s degree, he thought all of New York would resemble Manhattan. He says he has grown to appreciate Rochester’s artistic and cultural riches and its potential to grow as a creative hub.

“To me, Rochester is what Austin was 25 years ago — a nice, yet-to-be discovered city along a river. I actually like that Rochester is a little depressed,” says Kroll, referring to the Buddhist outlook of accepting the high and low phases of life and knowing that each will pass.

While Kroll’s art is based on appreciating imperfections, Lama’s craft in making the perfect cup of tea depends on the precision of timing, water temperature and the cut of leaf.

Growing up in the foothills of the Himalayas, covered with tea plantations, Lama was raised in a culture of tea. In the country that is the world’s biggest consumer of the beverage, tea was part of everyday life. Though Lama worked as a journalist in India, the tea import business keeps him connected to his homeland.

“Tea nourishes the soul. It takes some time and patience to calm down to enjoy the subtleties of the flavors of tea. While coffee delivers that jolt to get you through the day, tea offers the drinker a tranquil alertness,” Lama says.

Together, Kroll and Lama hope to foster a “tea society” at the studio, where tea lovers and those simply curious about tea can learn about tea ceremony traditions and the art of making the beverage.

Kroll and Lama see the repurposing of the Hungerford Building as symbolic to the revitalization of Rochester. Just as Lama’s tea is a symbol of welcoming hospitality in his culture, so it has been with the “open, welcoming” nature of the people he has met in Rochester since moving here with his wife and two small children just 18 months ago.

“Rochester to me as an outsider has been a very gentle, welcoming place,” Lama says