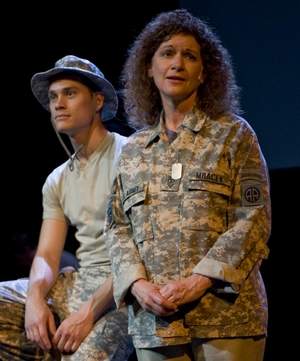 Here is my piece that ran in the October 28, 2012 Living section of the Democrat & Chronicle:

It is this wide range of wartime moments, pulled from the letters written by soldiers who fought, or are still fighting, that are the building blocks of the play Letters Home. Written for the stage in 2007 by Chicago’s William Massolia, the award-winning play makes its Rochester debut at 7 p.m. Friday in the Nazareth College Arts Center.

Letters Home is a series of dramatic monologues set against a backdrop of photos and video taken directly from soldiers’ blogs and websites. It aims to shed a non-political light on the everyday life of soldiers in an 11-year war that still goes on today although few Americans feel directly affected by its impact. Massolia hopes to expose his audiences to the toll this war has taken on thousands of their fellow citizens.

“As we move on to more than a decade since the start of the war, it is becoming part of our history while still being fought in the present. I hope the play gives people with little connections to the military a better understanding of what it means to serve one’s country during wartime,” Massolia, the artistic director and founder of Chicago’s Griffin Theatre Company, said in a phone interview while his cast ran through a technical rehearsal for an Atlanta performance.

Massolia and actor Michael Bartz, 24, of Chicago, who plays several roles in the traveling production, say reception to the play varies depending on how many audience members are part of military families.

In one scene, he plays Sgt. Jeremy Lussi, who wrote that the most gratifying part of serving in the war was cheering local children with gifts as simple as a pen or a piece of candy.

In another scene, Bartz plays Sgt. Cory Mracek, who died on Jan. 27, 2004, just eight days after arriving in Iraq. In Mracek’s letters, he repeatedly asks his family why he has not heard from them. Across the stage, an actress playing Cory’s mother is wrenched with guilt, knowing her son never received the letters she sent before he died.

Bartz says he knows when there are military families in the audience. Even if he cannot see their faces in the darkness, he can hear their reactions.

“During a performance, you can hear the sobs, and it definitely gets to me while I’m up on stage,” says Bartz, who has a friend who lost both legs in Iraq. In such moments on stage, and in post-performance conversations with those who have lost loved ones in battle, “you can feel their pride and pain.”

Ryan Flynn and Claude Jordy, combat veterans in their late 20s who are now Nazareth College students, are not sure they will see the play. The material, they say, may hit too close to home.

Jordy keeps the letters he wrote in Iraq and Afghanistan in a shoebox. He does not reread them, but says it is a comfort to have them because they are a part of his history. After he graduates, the native Texan hopes to become a college history professor specializing in American military history.

During an 18-month deployment in Nazaria, Iraq, Jordy was so focused on his mission as a sergeant in the U.S. Army 1st Cavalry Division, he could almost forget “that the other side of the world still turned.” One day, he received a letter from his parents with a picture of his little sister. Her arm was in a cast. Only through that letter was he updated of little details such as a sister’s broken arm back home in Texas.

“The longer you are deployed (over there), you start forgetting the reason why you are there in the first place,” he says. “Those letters from home remind you why.”

While the veteran soldiers said they often wrote home about the long stretches of doldrums they faced, they rarely went into detail about the conditions they endured or the battles they witnessed.

“Every soldier has a different experience. Each of us had different ways of coping. I can’t speak for all soldiers, but when I wrote home, I never wanted to worry my family about the things I saw,” says Flynn, a native of Rochester who is studying information technology.

Flynn and Jordy say Letters Home is a good idea if it sheds light on what a soldier must cope with while at war. Perhaps it can also lead to an understanding of what they go through as they transition back to civilian life as students.

Nazareth College has 63 veterans enrolled as students this year. That number is expected to double next year, says Jeremy Bagley, coordinator of veteran student enrollment and support services at the school. Bagley is a vital resource to student veterans, helping them get special grants for tuition and fees and internships with vet-friendly businesses and organizations. Bagley also provides veterans who are students with assistance in areas such as figuring out complicated financial aid packages or talking about the difficulties of transitioning from the military to a classroom setting.

Now that he is a student, Flynn says he has had to “lighten up” to adjust to the college campus culture.

“It took me a year to relax and adjust to campus standards. The urgency to hand in a paper on time is just not as intense as combat urgency,” says Flynn.