The Bats in My Belfry: Part I 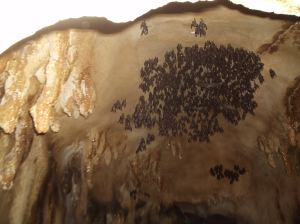 Could there be a colony of bats in your attic?

Since this is the Season of the Witch and all things creepy, it’s time to share a scary, true story with a very educational ending.  This story is about bats … and the Batman.

I love our old house. We live in a 1920’s English Tudor with all the old-world English Tudor charm. This charm includes leaded glass windows that are beautiful yet leak in the cold Rochester winter drafts, and copper plumbing that offers enough water pressure to either take a shower OR run the washing machine, but not both at the same time.

It also features a walk-up, half-finished attic, with its own bedroom/bathroom suite and a claw foot tub in the bathroom. This is where all our guests spend the night.

I greatly respect and appreciate bats. I love that the average bat can consume 1,000 mosquitos per night, and how they use sonar to get around, and I love the children’s story Stellaluna.

I want bats to have disease-free homes and be fruitful and multiply, just as long as their home is outside my home.

This is the part where things get scary.

One Saturday night, my husband and I were doing what we do on most Saturday nights: we were lying in bed watching Saturday Night Live. As you can see we do not get out much and that is why I blog for excitement.

We were nearly dozing off between the opening monologue and the musical guest when we thought we saw something fly by our bedroom door.

“Wha….” my husband was nearly asleep…

“Um, did we close Charlie’s cage before we went to bed?” I asked, hopefully.

At the time, our daughter had a sweet green parakeet named Charlie. I desperately convinced myself that it was Charlie that just flew down the hall.  Charlie got out, yup.

We went to our daughter’s bedroom. Charlie the parakeet was safe in his cage, door closed. But something was still flying in the hall. Something with a wingspan far larger than your average parakeet.

We could now safely say we had a bat in our house.

I ran screaming into the bathroom in our bedroom. My brave husband threw a towel over his head and went to pursue the winged rodent with our bed sheet.

With towels over our heads, my husband and I crept down to the kitchen to get the telephone book to search for someone, anyone, to help us. We dialed the town animal control hotline only to learn their hours were from 10-4 on Tuesdays and Thursdays. The outgoing message said to call 911 in an animal-related emergency.

Was this an emergency? SURE! There could be a rabid bat attacking us at any moment!

So my fingers shakily punched 911 and I alerted the local police that I had three sleeping children, including a 7-month-infant, and a bat was loose in my house.

In minutes, the police were at our door. Remember, this is Brighton, and not Staten Island, where years earlier I waited 45 minutes for police to arrive after calling about girls trying to break into my house to beat me up with a very different bat.

The friendly policeman came and humoured us by shining a flashlight all around the kids’ bedrooms and our living room, but found no bat.

“He probably found somewhere to hide. Bats are really shy and wherever he is, he will stay there till morning,” he reassured us.

This left me no comfort, and I scanned the Yellow Pages for more help after he left. By this time it was around 12:45 a.m.

Then, I found him. An ad for the Batman. From our bedroom, I called the number, figuring I would leave a message and someone would call me in the morning. Instead, to my surprise, I heard a low mysterious voice after a few rings.

I immediately apologized for calling at such a late hour, only to be answered with the Batman’s strange response.

“No need for apologies. This is usually the time when the calls come.”

Okaaayy. I told him the situation, and then he told me that this could wait until morning, that bats were very shy, want nothing to do with humans, and he would be by in the morning.

Oh, but one more thing, he said. There was a good possibility that if we found one bat, chances are there were not one – but a colony of bats in our attic.

With that the Batman bid me goodnight.

Nighty night and sleep tight. Stay tuned for the conculsion of this bat tale.

3 responses to “The Bats in My Belfry: Part I”