Bats in the Belfry: The educational conclusion

After you are told by the Batman in the middle of the night that you may have a bat colony in your attic, sleep does not come easy.

In my last blog post, I wrote about the night we were visited by a bat. There was a bat in our house. We saw it one minute and it flitted to an unknown location the next.

If you live up in the cold North like I do, and have not had the sufficient funds to replace every charming leaky window in your 77-year-old home, then you are familiar with the practice of wrapping your windows in shrink plastic for insulation.  On The Night of the Bat, the wind outside howled, causing the plastic wrap on our bedroom wrinkle and crinkle.   Of course, I mistook every wrinkle and crinkle for the wings of a bat and shot straight up in bed every 10 minutes throughout the night. I’d never wanted morning to come so badly.

Have you ever had a bat loose in your house in the middle of the night? I later learned that we were not alone in this experience.  Bats seem to be a common occurance in older, charming homes. Bats are the one uncharming feature that the realtor leaves off the charming English Tudor house listing.

We shared this story the next day with many of our friends. One couple we know,  who are avid campers, said when a bat swooshed over their heads in bed one night, they didn’t hesitate to pitch a tent over their bed to get a good night’s sleep.

I’ll have to remember that for the next time.

Morning finally came. I probably slept for two hours at best and my nerves were fried when my husband woke me to tell me about his discovery.

“You have to see this, I found the bat!”

He led me to our living room and I think I hid my head in his shoulder all the way down the stairs. Behind the honeycomb shades, up by the ceiling, there was a small shadow. Suddenly, this terrifying creature of the night seemed harmless. Even vulnerable. I quickly put on my boots and ran outside to get a better look.

Between the living room window and the shade, our winged intruder hung upside down and was fast asleep. I have to admit, swaddled in its pale grey wings, this small bat, the same creature that terrorized me, looked pretty cute.

A few hours later the Batman came for a visit. No, it wasn’t the Dark Knight or Caped Crusader of comic book fame. Just a guy with a five o’clock shadow at 10 a.m. wearing a red and black lumberjack flanel and jeans ripped through the knee.

He asked if our kids were around because they might like to see the bat up close and personal.

My fearless children ran down the stairs in their slippers to watch what became their own private wildlife demonstration. The Batman put on heavy gloves, produced a coffee can with holes cut in its lid, and gently removed the bat from our window shade. It was tiny, it was frightened, and now, in the capable hands of the Batman, it would be released into the wild.

As much as we love nature and wildlife, we resolved to keep these creatures out of our house for good. And no, upon further inpsection, we did not have a colony of bats in our attic.

After recovering from the sticker shock, we then called in another local hero: Leroy. Leroy is one of those guys that everyone knows by first name only and his name gets passed around by all the neighbors. For half the Batman’s asking price, he batproofed our home and gave me a full education on how you know if a bat is in your home.

1. Evidence of guano, or bat poop in your attic. Enough said here.

2.  Look at places like attic louvers, where the chimney joins the house, and gable ends of your house structure itself.  To my shock, I could put my eye between chimmney in our attic and the house frame and SEE outside. So this is where the critters were getting in. Leroy then used foam insulation and sealed up the gap like this: 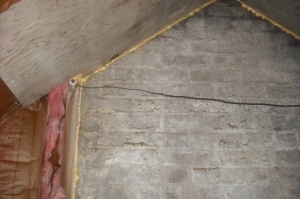 Keep in mind that sealing the opening must be done while also leaving for a way for bats to exit without re-entering the space. In an ingenious use of pantyhose, Leroy created a contraption that allowed a one-way exit for any bats that may have remained in our attic. If the openings are blocked during the daylight hours, the bats would have been sealed inside with the rest of the family.

I am happy to report that this story happened seven years ago and this house is clean of its bats. All the children are healthy rabies-free and none foam at the mouth. I wish you a bat-free winter and remember — bats really are harmless for the most part and want nothing to do with you, or your hair.

The only thing our society needs to fear – bedbugs!