Stealing glimpses of other fireworks from the Piers of Staten Island 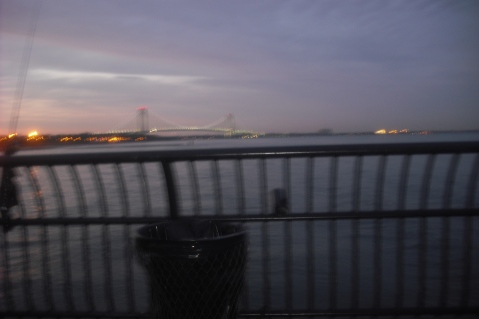 Mostly thought of as NYC's garbage dump, Staten Island has many places of beauty, like the pier

Last night it seemed that every other town with a beach or shoreline had a fireworks show. Every town, except, Staten Island.

Staten Island really does have some fine beaches that have come a long way since their more polluted and burned down boardwalk days of the 1970s and 1980s.

But, no fireworks. Staten Island, stuck between the sands of Long Island and the New Jersey Shore, remains the bastard stepdaughter for deserving her own fireworks display on the 4th of July.

Even the famed Macy’s fireworks, once visible from the waterways around the Staten Island Ferry, have been moved up the Hudson River and away from the Statue of Liberty. Got me mad enough to think about tearing up my Macy’s charge card.

But, my two sons had come down from Rochester to the Big City to see the Big City fireworks. We can’t see the Hudson River along the Upper West Side from Staten Island. And we were not driving to Jersey City.

They had two options: watch the Macy’s fireworks like the rest of the country – on TV – or take our chances and see what we can see from the Ocean Breeze Fishing pier off the South Shore of Staten Island. The Ocean Breeze Fishing Pier opened in September 2003. It is 835 feet long and 30 feet wide, making it the largest steel and concrete recreational pier on the Atlantic Ocean built in 100 years in the New York region.

As the sun set, families gathered. People continued to fish off the pier. The air smelled of rotting fishheads, cigarettes, salt air and tar. A woman yelled at her young daughter “Do you know what you said? That’s a curse word in Italian and I better not hear it again…” And then, something bright exploded off in the distance. In every direction.

From the pier, we had a panoramic view of nearly every fireworks display – from the Atlantic Highlands of the New Jersey shore, to ones out in the Far Rockaways. Some “homemade” shows were on display in nearby South Shore neighborhoods. But we didn’t feel the boom of fireworks that can rattle your insides like a drum like when you see them up close. Most were too far off to even elicit a sincere “oooooh” or an “ahhhhh.’ But they were fireworks, alright. They were just meant for some other place, some other town.

And then, around 9:45, one could make out the very top glow of the Macys Fireworks coming from the other side of the Island. Maybe we could have seen them from Bay Street after all. Maybe. Maybe next year.