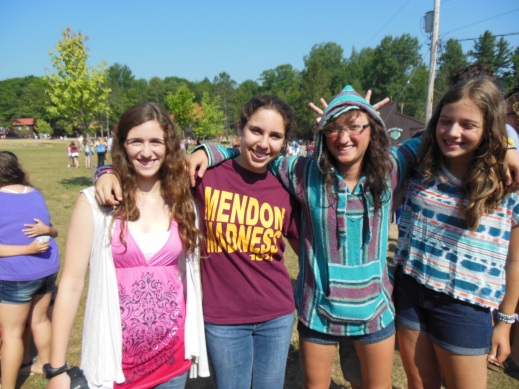 When people ask me where I send my kids to camp, I tell them I send them to Camp Ramah.

Now, when you live in a town where traveling even 30 minutes to get somewhere seems like traveling to another planet (and I’m guilty of this as well), they then reply, Oh, the Camp Ramah in Toronto.

And then I say, “Nooo, it’s actually two and a half hours further. North of Toronto. In a region called Muskoka.”

The response I hear is: Isn’t that far?

Yes, I send my kids for a month, and now for my oldest two months, six hours away.  Many see this as a sign of bad parenting. Many cannot fathom why we’d want to get rid of our kids for a month or even two. But, I have a friend who has five boys. Once, when we ran into each other grocery shopping, she spoke to me about the beauty of summer camp.

“Everyone for one time a year gets to live in their own space. It’s really very healthy.”

To get to camp, they travel across an international border and this requires they all need passports.  But that means they are truly away from home, broadening their horizons and meeting kids from many countries and cities who are all bound together by a common heritage and a way of observing this heritage.

This is what I keep reminding myself in the hours my husband and I find ourselves in bumper-to-bumper traffic on our way to visitors day.

The first time I drove up to Muskoka, what surprised me most of all was the traffic. I mean, I can accept traffic in the New York Metro area, but traffic in Canada?

Yes, this is my American arrogance shining right through, because I never imagined such a huge population can exist North of the United States.

In reality, the Toronto-Muskoka corridor is packed. If you want to put it in terms of an SAT verbal analogy question, then  Muskoka is to Toronto as the Jersey Shore is to the New York Tri State area.

So, picture yourself on the Garden State Parkway on a Friday or a Saturday and you now completely have an understanding of the traffic scene of “cottage country.”

On the 11, suddenly the traffic opens up, and you find yourself on a road that ambles along sparkling lakes and pine forests.   A road that’s dotted with honky tonk motels and camper parks, kayak rental places, and fruit stands. And you know you’re almost there.

Friendship and Kehilah Kedosha (holy community) It’s the smile on the kids faces that I see on nearly every photo that is posted on the camp website. The photos where nearly 600 children, freshly showered and dressed and arms linked, make their way down to the waterfront for another Shabbat service, that gets me every time. I know that we are doing right by our children for parting with them for a summer of this:

My children are developing deep friendships and in turn, we are also making friendships with the families of these children, all within the framework of an immersive Jewish education program that is nearly impossible to duplicate outside of camp (but I keep trying).

Inclusion: When we arrived at camp for visitor’s day, the very first child my 15-year-old daughter talked about and wanted us to meet was her new friend Julie:

Julie, who has Down’s Syndrome,  is participating in Camp Ramah’s Tikvah program.  Each day, Jolie meets with Julie to tutor her in Hebrew and through these lessons a friendship has blossomed. I am sure the girls will keep in touch long after camp is over.

Family – In truth, campers, and in turn their families, become one extended family. But I have actually reconnected with extended family members on my grandmother’s side that before our Camp Ramah years, I have not seen in decades. Now, the great-grandchildren of my grandmother and her eldest sister attend the same camp. We stay in touch during the year over Facebook and we’ve got plans to visit them in Pittsburgh at the end of the summer.

New Hobbies: Because of his summers canoeing and kayaking in Skeleton Lake, I got into a canoe with my son with confidence. I sat in the front of the wobbly canoe, knowing he would be the one to give me direction on how to stroke and where to steer the boat: 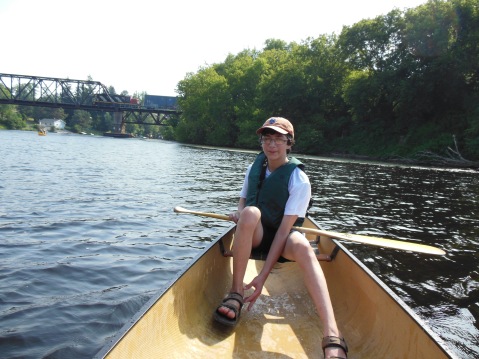 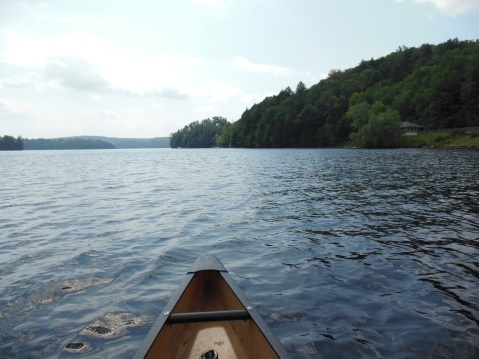 My daughter also took up a hobby, making her own boat in woodshop: 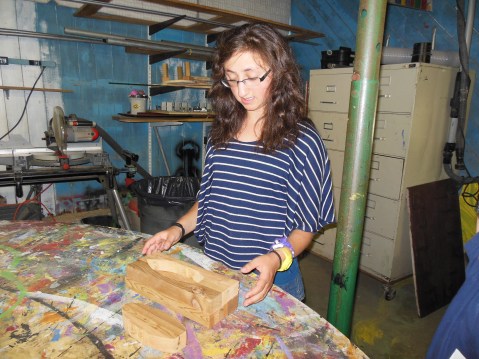 She also painted the sets for and was one of the angels in “Beauty School Dropout” in the Camp Ramah production of Grease.

And all plays at camp Ramah – the lines and the songs –  are performed in Hebrew.

I don’t know how to sing “Beauty School Dropout” in Hebrew just now, but I bet my daughter will teach me when she gets home.

Finally, off camp, there is the town of Huntsville with the world’s most amazing candy store and ice creamery, great restaurants, art galleries inside and out,

and nearby Arrowhead Provincial Park where you can swim in a pristine lake, hike to a waterfall and climb in and see fish swimming around you in the current:

And, at night there is darkness. A rarity in our increasingly lit up world, the skies are dark enough to see THOUSANDS of stars, and even spot a fast-moving satellite:

Really, there are stars in this photo. If you don’t believe me, you’ll just have to go up there for yourself. I’ll even tell you which field to stargaze.

So, we’re back. I try not to think about how far away my kids are, kind of how an extreme rock climber just keeps looking up and doesn’t think how high off the ground they are. But we are happy in our space, and they are happy in theirs.

And the schlep is completely worth it.

One response to “Muskoka & Camp Ramah — It’s worth the schlep”