If you have a child approaching Bar/Bat Mitzvah age, some Inspiration from Space 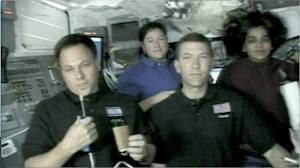 The astronauts from the ill-fated Columbia Space Shuttle. 10 years ago, Ilan Ramon was the first Israeli in space, and he had to take this Torah scroll with him.

My latest student sat before me sullen. Sad even. Completely disengaged. The chid complained of a headache, even a stomachache and could NOT find the strength to sing.

The child had not a chance to review the sentences given to it to study months ago. The child’s iPod had also mysteriously stopped working, so he/she could not listen to the melodies of the chanting either.

To many emerging young Jewish adults, studying for one’s B’nei Mitzvah may not be your thing. You’ve got a life, for gosh’s sake! That life is full with homework and friends and sports and has nothing to do with chanting a strange language in a building you hardly go to!

And what does all this Hebrew mean that I can barely read and hardly understand?

And how am I going to find the time to study?

When it comes to hunkering down and preparing for one’s Bar/Bat Mitzvah, many obstacles can get in the way. In a recent post on the Jewish culture blog Kveller, a rabbinical student even honestly put it out there: why put your kid through the motions of having this Bar/Bat Mitzvah ceremony if it is devoid of meaning, when a small percentage of Jewish adults even volunteer to read from the Torah after they reach that milestone day.

Like it or not, kid, you are the next link in this 5,000 year chain that cannot be broken.

Last night, after my student left and after dinner and dishes, I watched a PBS special: Space Shuttle Columbia: A mission of Hope,  about the 10th anniversary of the Columbia Space Shuttle disaster. What made it all the more tragic was it was the first time an Israeli, Ilan Ramon, son of Holocaust survivors, took a trip to space.

A Torah that survived the Holocaust.

A Torah that had been used to prepare a boy for his Bar Mitzvah in the hell of Bergen-Belsen concentration camp. A boy that survived and grew to be an old man living in Israel still in possession of this tiny scroll.

A Torah that, when Ilan Ramon heard of its story, he knew it had to accompany him in space.

For all of the Jewish people.

I’m not going to retell the story here. I won’t do it justice. But if you can, watch with your family Mission of Hope, and you will understand the Big Picture of why joining the Jewish community as a fully participating adult is an incredibly precious honor.

If that’s not inspiration enough, then look at this photo below:

this is a recent picture of men, Holocaust survivors, who never got to be Bar Mitzvah boys. Until today.