We are Merely Freshmen 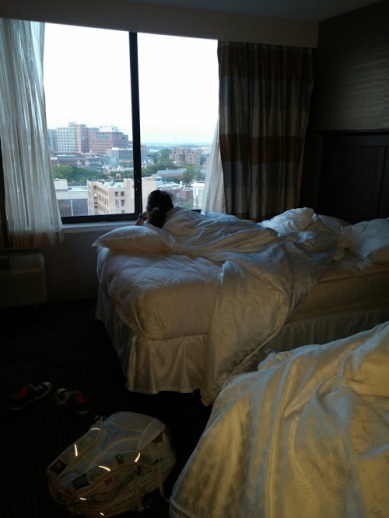 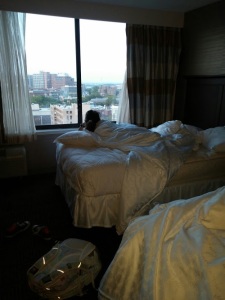 On a hot sand dune overlooking Lake Michigan, an older woman, newly transplanted from Philadelphia greeted us on our hike with a friendly hello when she noticed my husband was wearing a baseball cap from the University of Pennsylvania.

We struck up a conversation. Yes, we were transplants too from back east. Yes, my husband did go to school there.  And soon, our daughter would be starting her freshman year in Philadelphia.

“She is going to love it! So much has changed there since you went to school. Some people call it the sixth borough of New York City.”

……Now, I do not know if a true Philadelphian would appreciate that comment – Philadelphia truly can stand on its own with its own identity as a full-fledged city.  Perhaps she was just trying to reassure us. That Philadelphia was great and getting better by the day. That the City of Brotherly Love would be kind to my daughter, a freshman. And kind to her parents, who are freshmen again in some ways, trying to start over another chapter with one kid out the door and on her way to adulthood.

She’s starting her first semester of classes there. The rest of her family, we are making the adjustments.

Now, readers, I know I am not the first parent with a kid going away to college. But I never expected to transplant our family so far from our east-coast roots, only to have a kid return to the east coast. From here on in, life changes. It is not certain if she will ever live home full-time again. It is not even certain if she will return in the summers. Two years ago, we were all freshmen in Michigan. Two years ago, I really thought she was going to be a college freshman. At Michigan.

Just hours before, the three of us – my daughter husband and I woke in a hotel room. My daughter opened the curtain and took some time to stare out at the campus sixteen stories below her. The next four years of her life could be seen from a bird’s-eye view.

At 7:30, Philadelphia was waking up as workers grabbed their coffee to go and headed out on the hot sidewalk. The city was also gearing up to welcome back all the students.

Streets were blocked off around the dorms: 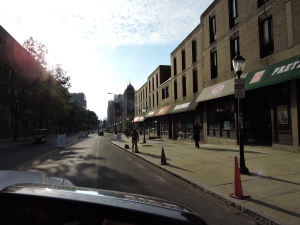 We pulled up to a loading spot where an army of kids wearing bright yellow T-shirts were there to help us. What took us about a half hour to load, they unloaded in about five minutes. 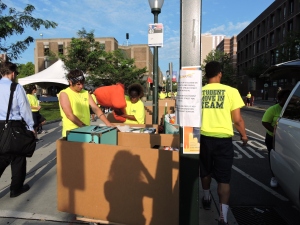 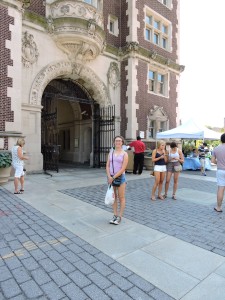 Her quad is peaceful and serene, lined with Ivy-clad dormitories, benches, gardens, statues and graced with an old dorm room beset with a marble and concrete facade in a quadrangle of other old buildings graced with Ivy and a centuries-old Elm tree providing shade for studying, or just a good nap,

Within a few hours, we had all her stuff moved up her third floor dorm room, complete with a “basement.”

Yes, her dorm room has its own basement. If you are packing up your kids for college, I highly recommend getting those squishable zip-lock bags that can vacuum seal your kid’s winter coats to the thickness of a crepe: 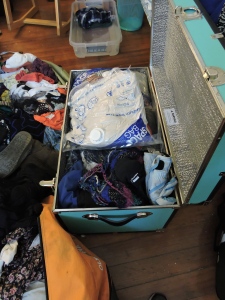 See? With five of these bags I was able to squish several coats and a winter’s worth of sweaters into her “basement” – really a trunk that is stored under the bed.

After we settled her in, it was time to explore.

I had many emotions coursing through me. Pride. Happiness. Awe. Sadness. But they couldn’t match what my husband was feeling that day. See, this was his college. His memories. His old haunts and stomping grounds. He even took us into his old dorm, in the same ancient quad just a few buildings down from my daughter’s:

I admit I have a bit of resentment. The two of them as close as they are will share these years at Penn, something I will never share. As a men’s chorus sang The Red and the Blue, I could not help feel a sense of envy, and strained in my own memory to hear verses of “On the Banks of the Old Raritan” from Rutgers. She will never go there. None of my kids will.

Still, like going to a school even older than Rutgers – Penn was founded in 1740 – you cannot help feel a sense the heritage of this place.

Even within with Penn Library exists some of our country’s most significant historical artifacts, including amazing one of only 48 printed copies of the Emancipation Proclamation signed by President Lincoln himself, which we had the rare opportunity to see.

As I stood on line to glimpse at this bit of history – hastily retrieved from the archives by a librarian who did not know that the University president suggested all incoming freshmen and their parents to visit the library to see it before they parted campus – my husband beckoned me over to another treasure trove of an exhibit.

There, in a quiet corner gallery in the library’s sixth floor, was a collection on display of some original artwork and some rare original printings of Ludwig Bemelmans, most famously known for his Madeline children’s books.

A book read to my girl as she sat on my lap night after night, A book that was one of the first she had learned to read herself ….now this young woman starting college,

As the afternoon wore on, it was time for us to say goodbye and for her to start her life.

As we walked her back to her dorm room one last time, I wondered what it would feel like for her, waking up for the first time pretty much by herself. She had no breakfasts in her meal plan. Who would she hang out with? What would she eat? Would she make a healthy choice at the nearest Wawa (you don’t know what Wawa is?) or would she consume complete crap? Who was going to tell her to drink the milk? To whom would she roll her eyes in response?

As I gave her my final embrace until October, I noticed a closed yet filled Nalgene water bottle laying on its side on her brand new comforter set from Bed Bath and Beyond.

For probably the first time, I didn’t nag her about leaving things lying around.  For eighteen plus years, I have done all the nagging a mother can do that is in within the limits of legality. After all, this was her bed. In her dorm. In her new life at college.

So as I learn to let her go, I let that water bottle go.

I just wonder if she knows what setting to put the dryer on if indeed there was a leak.

One response to “We are Merely Freshmen”