After The Flood – Grief, then Grattitude 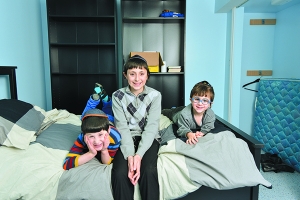 It’s been a while since I’ve blogged purely for blogging’s sake. Writing and teaching more for pay will do that.

Here is my cover story from this week’s Detroit Jewish News. Thank you for my new community for allowing me into your lives to listen and record your stories as you overcome from this summer’s rains:

Gratitude and perspective are common feelings among those hit hardest. If Daniella HarPaz Mechnikov of Huntington Woods could write some Twitter-style hashtags about her feelings during the months following this summer’s floods, they would be #perspective and #gratitude.

Just two years ago, Thanksgiving 2012 was the last she would spend with her mother, who died in early 2013. In comparison, the sadness caused by this summer’s floods — timed just before her daughter’s bat mitzvah — was minor. Most people had a mourning period for their soggy basements and possessions, but realize it is time to move on.

“In the weeks after the flood, the flood was all anyone talked about,” Mechnikov said. “At the summer soccer games, the main topics of conversation in Huntington Woods were ‘How much water did you have?’ ‘Did FEMA help you?’ and ‘How long did it take you to find a contractor?’ Now, we are trying to put the flood behind us. We had a few bad months, but now we are trying to shake it off.”

In her home, the basement is restored with new drywall, paint and carpeting. Mechnikov was thankful to have taken out a sewage backup rider on the family’s home insurance policy, which helped pay for the damage. Their hot water heater is hanging on, and the big screen television in the basement was saved because it was placed on a high shelf. There is no longer a comfortable couch on which to watch it, but replacing it is not a high priority for the family now.

Throughout the neighborhoods in Oak Park and Huntington Woods, this sentiment of putting things in perspective during the Thanksgiving season repeats itself. Belongings, even as precious as journals kept over a lifetime or sacred prayer books, are just material possessions. Most residents express gratefulness that few lives were lost or injuries occurred because of the rising waters.

Many express their gratitude for the strong showing of coordinated financial and emotional support provided by local and out-of-town Jewish agencies.

Shaindle Braunstein, chief administrative officer of Jewish Family Service in West Bloomfield, said in the weeks following the mid-August floods, the agency received hundreds of calls and assisted 309 families victimized by the flood — 253 of which had never before contacted JFS for help. According to Braunstein, JFS distributed $700,000 in grants to families who needed to clean and remediate their basements and replace furnaces and appliances, and also emotional support in helping overwhelmed families — sometimes with 10 or more members — sift through the paperwork they needed to file with FEMA or insurance agencies.

Kathy Moran of Detroit’s Focus:Hope, the organization responsible for coordinating the company’s donated furniture distribution across multiple relief agencies, such as JFS and the American Red Cross, said the company donated 300 sofas, 225 dressers, 100 carpets and 150 mattresses to deserving households.

She said Art Van Furniture “went above and beyond” in its generosity when it additionally donated 150 bookshelves for children’s basement bedrooms so children could once again rebuild their home libraries.

JFS was thankful not only for its existing local infrastructure, but also for the added efforts of out-of-town Jewish agencies such as NECHAMA, based in Minneapolis, Minn., which had boots on the ground through October and cleaned 250 houses; and IsraAID: The Israel Forum for International Humanitarian Aid.

“Because of our everyday, business-as-usual infrastructure and coordination with partnering agencies such as the JCC in Oak Park and the Jewish Federation of Metropolitan Detroit, families knew how and when to reach us when the floods made the situation far from business as usual,” said Daniel Trudeau of JFS. “Grassroots organizations like Chessed, NECHAMA and IsraAID were instrumental in reaching those most heavily affected to get the word out of how to get help.”

Braunstein said the grassroots organization Chessed was an “invaluable” partner in reaching out to the Orthodox community in Oak Park and identifying needs. Many have large families who use their basements as prime living and sleeping quarters. Not only did they help in the distribution of furniture donations from Art Van, but also in coordinating donations of household goods from as far away as Cleveland and Chicago.

Hebrew Free Loan also offered assistance by approving a total of $290,000 in loans, according to executive director David Contorer. He said his agency did everything possible to expedite 43 loans for families in need of basement restorations and new furnaces and hot water heaters.

“We sped up our approval process by 50 percent,” Contorer said. “We knew there was an urgency to clean out basements because it was an immediate health issue, and getting these no-strings-attached dollars to clients was very important.” One family that benefitted from JFS services was the Goldsteins of Oak Park. Channie and Yitz Goldstein have eight children, and they both work. They were not receiving assistance of any kind from JFS before the flood. Three children have bedrooms in the basement. Yitz, a computer analyst, also uses the basement as office space.

Channie Goldstein, a teacher, expressed gratitude that when the floods started, it was during the day and no children were asleep in the basement. In fact, she said all her teen-age boys were home at the time and when the basement began to flood, they acted quickly to retrieve as much as possible to the first floor. The family’s computers, the washer and dryer, and some other important belongings were hauled up the steps.

Outside, Goldstein said neighbors kept running out of their houses asking each other if they had water in their basements.

“When we all realized we all were flooded, there was nothing left to do but watch the water rise inch by inch,” she said. “My little ones were frightened and upset as they watched their toys floating in the basement.”

She added that it could have been worse — it was just water, not raw sewage as faced by others in neighboring areas, such as Huntington Woods.

The Goldsteins tried to do as much of the clean-up work and repairs themselves, following expert basement remediation guidelines from NECHAMA in how to rip out waterlogged walls and floors and taking all the recommended precautions to prevent the growth of mold.

However, the cost of repairing their basement and replacing what had been lost came on “too fast and all at once.” Goldstein said her family received minimal support from FEMA and the cost of the damages were not completely covered by their insurance. In the months following the flood, the Goldstein household is slowly getting back to normal. After a few weeks of sleeping in the living and dining rooms, her sons were able to return to their basement bedrooms — albeit half finished — in time to use the upstairs space for Rosh Hashanah.

The entire experience made Goldstein very aware of just “how quickly life can change from everything being OK to finding yourself in crisis mode.” She and her family are extremely thankful and comforted to know she could count on the support of JFS and its partnering agencies “when we fell.”

“Everyone on the block was supporting each other — whether you needed an extra bottle of bleach, another mop or just a hug of support. We came through this experience learning that we can help each other and that we, in turn, can help others who were hit much worse than ourselves.”

Repairing and starting fresh after the flood has its bright spots. Rabbi Robert Gamer said that his sons are enjoying the new, waterproof epoxy floor that was recently installed in the basement of his family home in Huntington Woods.

“They think it is really cool because it glows in the dark,” Gamer said. “They are just glad to have a functional play space again, even though the walls are not back up.”

In the weeks after the flood, Gamer spent time not only tending to his own home but providing hospitality and rallying the community together for barbecues and Shabbat dinners. Gamer’s congregation, Beth Shalom in Oak Park, served as a host home for the eight IsraAID volunteers who worked tirelessly for almost three weeks cleaning out neighborhood basements. The Gamer family showed their gratitude to the Israeli volunteers by having them all over at their home for a Shabbat dinner.

“We had some fantastic conversations about Jewish faith and philosophy, and what it is like to be a Jew living in the United States versus being Israeli,” Gamer said. “Plus, one of the volunteers is a professional soccer player and he loved kicking a ball around with my kids after dinner.” Now that winter is setting in, Gamer is thankful to be able to clear out his garage of all his shuffled basement belongings so both family cars can fit inside. He is thankful for the surprising speed at which FEMA handled his own personal flood claim. Most of all, all the things his family lost were “just material possessions,” as he sadly recalled the death of a congregant caused by the storm.

“In spite of how bad it was, more lives could have been lost. When you look back at the pictures of 14-foot swells of water under highway overpasses, you realize how thankful we should be that there wasn’t even more loss of life.”

One response to “After The Flood – Grief, then Grattitude”